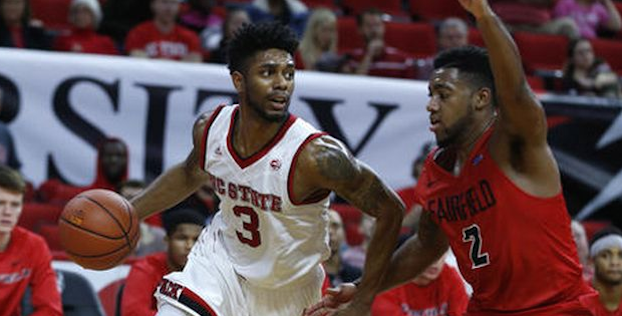 A big reason for NC State’s outburst: Terry Henderson, who is playing the best basketball of his career. After hitting his first four shots from beyond the arc, the transfer from West Virginia finished 6-of-10 on 3-pointers. Fairfield started out in a zone defense, and Henderson made them pay for it. It was the fourth game this season he’s attempted 10 or more threes in a game. The game high 25 points he scored against Fairfield marked the fifth time this season he’s eclipsed the 20-point mark.

Henderson is launching 6.8 threes per game (10.8 per 100 possessions), and has made 41.3 percent of them (31-of-75). He ranks second in the ACC in terms of 3-pointers made and attempted — behind Syracuse’s Andrew White III in both categories. The senior is second on NC State’s roster in terms of player efficiency rating: 20.9. He’s also tops on the Wolfpack in win shares — 1.8.

His three point shooting is only part of what makes him efficient, though. Henderson draws 4.5 fouls per 40 minutes — one of the highest rates on State’s roster. He also has a free throw attempt rate of 45.5 percent, which is one of the best 315 numbers in America, according to Ken Pomeroy. The Raleigh native attempts north of five free throws per game.

NC State has won four games in a row — for the first time this season — and has two more non-conference contests before their ACC schedule opens up: McNeese St. and Rider. The Wolfpack have a lot of ground to cover when it comes to improving its defense; however, Dennis Smith Jr., Torin Dorn and Henderson have formed a potent perimeter trio for Mark Gottfried’s club on the offensive end. The Wolfpack are one of 33 teams scoring at least 1.13 points per possession, and Henderson provides them with the necessary three point shooting and spacing.