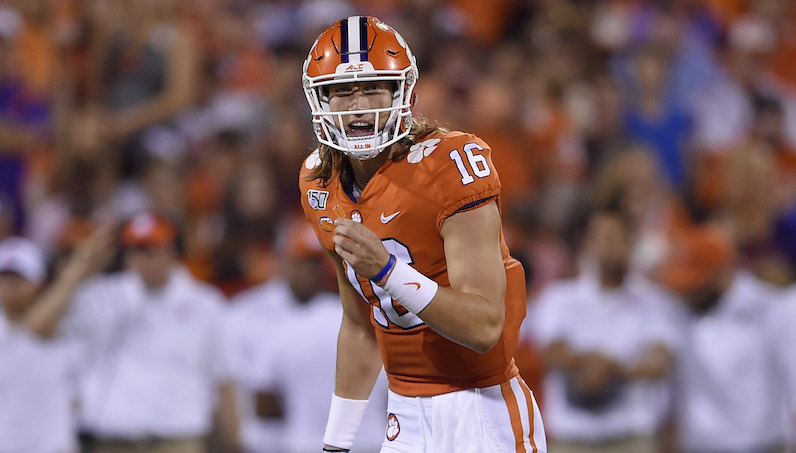 Clemson quarterback Trevor Lawrence calls out a play during the first half of an NCAA college football game against Charlotte Saturday, Sept. 21, 2019, in Clemson, S.C. (AP Photo/Richard Shiro)

The most bizarre week in college football history ended with a possibly historical moment — one that could change the landscape of college athletics for years to come. In the middle of a global pandemic, are major college football players on the precipice of forming a union? Perhaps it’s too early to say, but the #WeWantToPlay movement is here and, from the looks of things, this appears to be a fitting coda for an unprecedented week in these unprecedented times.

Mere days after the ACC announced its official schedule for the 2020 football season, the mood seemed to shift regarding the reality of playing a season this fall amidst COVID-19. On Sunday, Power Five conference commissioners held a meeting to further discuss the viability of a 2020 season. After months and months of indecision, the 2020 football season was quickly falling apart. Some P5 conferences, led by the Big Ten, may prefer to play football this spring. Either way, the outlook seemed rather grim.

However, come Sunday evening, prominent players across the ACC and other Power Five leagues took to social media to express their desires to play ball in the fall.

People are at just as much, if not more risk, if we don’t play. Players will all be sent home to their own communities where social distancing is highly unlikely and medical care and expenses will be placed on the families if they were to contract covid19 (1)

The “We Want To Play” hashtag started to fly around, too, as players from various programs chimed in with further encouragement.

North Carolina quarterback Sam Howell was far from the only player along Tobacco Road to voice support of the movement. Veteran NC State linebacker Isaiah Moore was in agreement; so, too, were several of his Wolfpack teammates.

This, however, appears to be the start of something potentially much bigger than the inherent desire to perform football this fall.

Word broke late Sunday night — around midnight on the East Coast — that Lawrence and Clemson teammate Darien Rencher were in contact with representatives from every other Power Five conference regarding the creation of the #WeWantToPlay movement. It’s an organizing effort with some serious goals.

Power 5 Conferences all together pic.twitter.com/h1uX7198vo

As Rencher stated on Twitter, they have teamed up with recent player-led organizing endeavors that emerged from the Pac-12 and Big Ten. (Last weekend, when I wrote about the emergence of the Pac-12’s #WeAreUnited movement, I highlighted the potential for these organizing groups to gather and display collective strength in numbers. It’s powerful and has the ability impact change. Well, here we are.)

Outside of the ACC, several other Power Five high-profile stars, like Ohio State’s Justin Fields and Oklahoma State running back Chuba Hubbard, made their opinions known, too: #WeWantToPlay.

For football players that want to play this fall, the initial list of demands appear simple, yet this type of cohesion escaped Power Five leaders for the entirety the last five months. As far as feasibility goes, well, that’s a mystery at the moment, but this is a good start. Here’s the upshot:

From what Lawrence tweeted out on Sunday to the list of demands, it’s clear: lots of Power Five players want to play football, and believe that they’ll be safest regarding COVID-19 while around the healthcare services of their universities.

It’s no real surprise that players want to do what they love: play football. However, what schools choose to do with this, amid liability concerns, is another story. ACC leaders are set to meet on Monday.

To be clear, this effort is just a start; but it signifies a potential flashbulb moment — a necessary paradigm shift for the antiquated business model and decision-making process of major college athletics.

The 2020 season may still be lost or postponed, but college athletes that want to play are making sure their voices are heard, while also respecting their teammates and opponents that choose to opt out. That’s commendable, and it may prove to be historical, too.

this is a damn moment

College football players have agency; their ability to demonstrate that power for collective gain is something that should worry the gatekeepers of inequity in the sport.

The #WeWantToPlay movement may just be the spark the lights the fire.