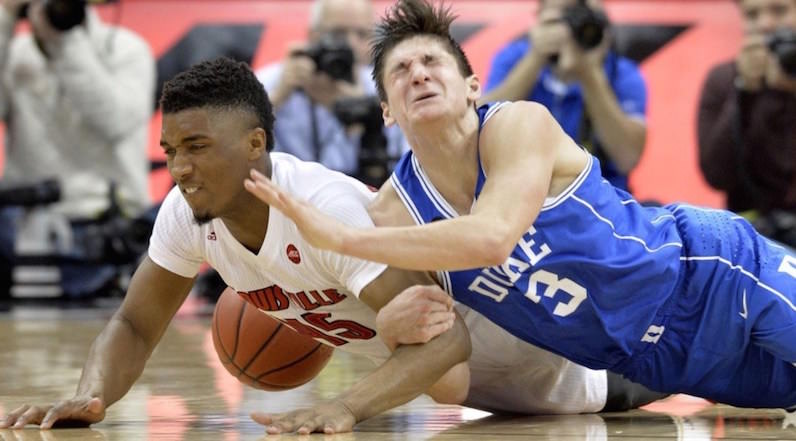 Donovan Mitchell is one of the ACC's best at impacting the game on both ends of the court. (AP Photo)

It may not always be pretty, but there is no questioning the talent of Louisville.

The Cardinals feature the No. 2 defense in the nation, are 9-4 in ACC play and steadied the ship when starting point guard Quentin Snider missed six games with an ankle injury — going 4-2. Donovan Mitchell, a favorite at the ACC Analytics tab, has emerged as one of the league’s best players; in fact, KenPom.com has Mitchell ranked behind only Bonzie Colson for the ACC’s best player.

Louisville snagged a victory on the road — a rarity in the ACC this season — at Syracuse on Monday night. The game, which went into overtime, struck a chord with me because of one key factor: the shooting performance of Syracuse.

The Orange turned their season around in recent weeks behind the power of the long-ball — three-pointers rained as wins stacked up.

For the first time in over a month, though, Syracuse shot below 30 percent from beyond the arc; Louisville put the clamps on the Orange. Syracuse went just 8-of-34 (23.5 percent) on three-pointers — the third-worst shooting percentage from downtown this season. If you follow Louisville, however, that comes as no surprise.

The Cardinals use a swarming man-to-man defense to protect every foot of the court. Opponents simply will not beat them by just shooting over this team — they are too long, too athletic and too disciplined.

According to Synergy Sports, Louisville ranks No. 9 in the nation (No. 1 in the ACC) in opponent shooting percentage on catch-and-shoot opportunities: 0.82 points per possession on 28.9 percent shooting. Only one other ACC team — Duke — currently holds opponents to sub-30 percent shooting on said possessions.

This team doesn’t block a ton of shots — the Cardinals rank No. 113 nationally in block rate, according to KenPom — but Louisville does a wonderful job contesting and challenging.

He does more than just contest pick-and-roll attempts, though. On spot-up possessions, Mitchell has forced opponents to a meek 22.2 field-goal percentage and has forced a turnover on more than 11 percent of those possessions — both of which are top-five numbers for ACC players who have defended at least 80 spot-ups.

His defensive prowess extends in a variety of ways, too. Mitchell ranks 25th nationally in steal rate (4.1 percent), but he manages to disrupt without costing his own team. According to KenPom, Mitchell commits just 3.1 fouls per 40 minutes.

As far as seeding for the conference tournament goes, Louisville controls its own destiny for Brooklyn. A regular-season ACC crown is not out of the question for the Cardinals; Louisville plays at North Carolina next Wednesday. Perhaps more importantly, though, Louisville — barring some sort of collapse — should be locked in to a top-four seed and a double-bye for the ACC Tournament.

The Cardinals, led by a potent defense, have the chance to do more than just win the program’s first ACC Tournament victory; this is a team that can make a March Madness run.