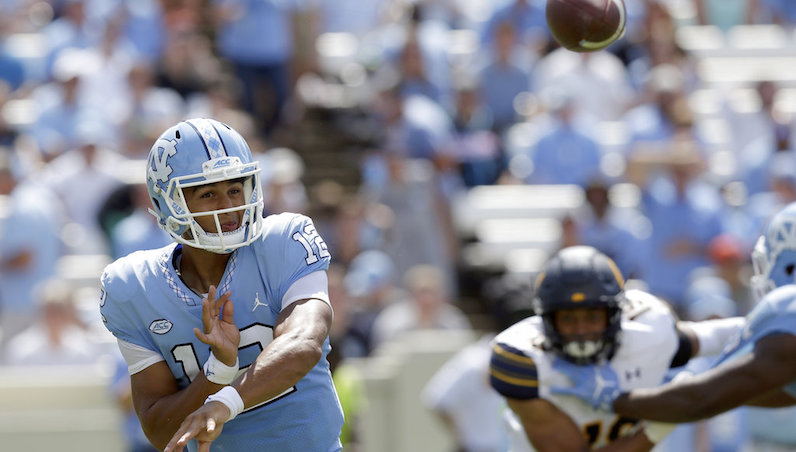 North Carolina football certainly didn’t start its season the way they wished to. The Tar Heels gave up 14 fourth quarter points, and fell by five to California.

After two ineffective series by grad transfer Brandon Harris, redshirt freshman quarterback Chazz Surratt entered the game. Surratt would go on to outperform Harris last Saturday, which has sparked a some of the gone-but-not-forgetten quarterback controversy-talk this week.

Larry Fedora has yet to name a week two starter, but before UNC jumps ahead to Lamar Jackson and Louisville, let’s take note of a couple things from Surratt’s debut.

Surratt’s touchdown to close out the game had zero impact on the outcome, but he did look confident running North Carolina’s option.

Freshman running back Michael Carter, who also made his college debut against Cal, scored twice on option plays — both times with Surratt as the trigger man, making pitches with both hands.

Carter also busted a 47-yard run down the left sideline with Surratt in at quarterback, which would set up his first touchdown.

The lefty quarterback had two carries of at least 10 yards; three of his carries resulted in first downs or a touchdown.

It would help the process of breaking in a freshman quarterback to have some experience at the receiver position. UNC isn’t exactly lacking in this department, thanks to Austin Proehl and Thomas Jackson, but it’s a far cry from the likes of Mack Hollins, Bug Howard and of course Ryan Switzer.

The freshman targeted Jordon Brown more than any other receiver — seven times. Brown hauled in all seven of those tosses for 46 yards. Jordan Cunningham, who was the second-most targeted receiver (five), caught three balls for 34 yards (6.8 yards per target).

Austin Proehl — UNC’s most experienced wide receiver — was targeted on only two of Surratt’s passes (7.1 percent target rate), making one catch for 14 yards.

It would be unwise to draw too many conclusions for only one game, but you can see that UNC didn’t ask too much of Surratt — at least not yet. Not one of the nine players he targeted averaged nine yards per target.

In 2016, playing with Mitch Trubisky, Hollins, Howard and Switzer all averaged at least 8.7 yards per target.

North Carolina had five scoring possessions in this game; Surratt was the quarterback for four of those series, including all four of the touchdown drives.

Kicker Freeman Jones missed a 45-yard field goal in the third quarter on another drive manned by Surratt, too.

In total, North Carolina ran 89 plays in this game — 16 more than Cal. However, the Tar Heels were outgained by almost 1.5 yards per play. This needs to be improved.

How long will it take for Larry Fedora to settle on a quarterback?