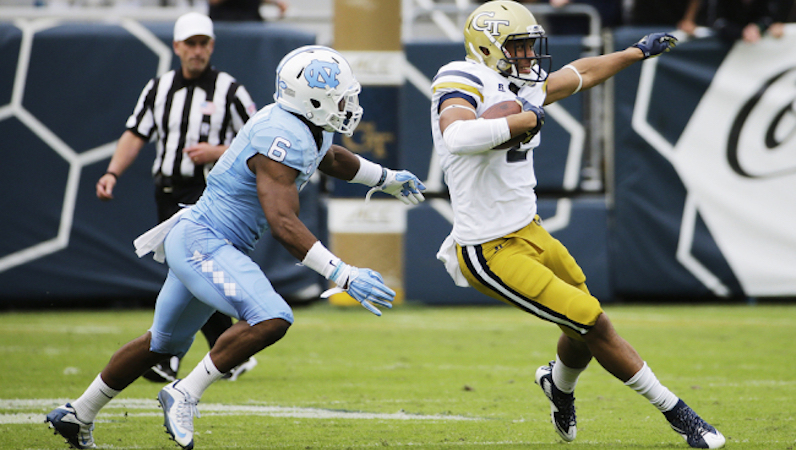 North Carolina football will look rather different in 2017. Mitch Trubisky is gone from an explosive offense that saw several of its key skill players depart, too. Gene Chizik — the defensive coordinator that helped right the ship on that side of the ball in Chapel Hill — has also left town. He wasn’t alone, either. Defensive line coach Tray Scott departed for Ole Miss; a few weeks later, Charlton Warren left to coach Tennessee’s defensive backs and special teams.

One very important face does return on defense, though. Senior cornerback M.J. Stewart is back, and he’ll be more important now than ever before.

For the last two seasons, M.J. Stewart paired nicely with Des Lawrence to form arguably the best cornerback duo in the ACC. Lawrence, however, is no longer in Chapel Hill; he’s currently a member of the Detroit Lions.

Stewart will be have to a shutdown corner for new defensive coordinator John Papuchis. Luckily for the Heels, Stewart has gobs of experience — 37 career games, including three bowl contests.

He brings more than just experience, though. Stewart has constantly produced for UNC. Stewart is one of just seven returning ACC players that defended 11-plus passes in 2016.

North Carolina famously struggled to cause turnovers through the air last season; the Tar Heels finished dead last in the ACC with only one interception. Sports are random — that’s part what makes them so much fun — but this is an anomaly that I’m sure Larry Fedora will be happy to see corrected.

The year prior, in 2015, M.J. Stewart led the ACC with 18 passes defended; that included four interceptions — good for fourth in the conference.

Despite the lack of interceptions in 2016, Stewart and the UNC pass defense were still pretty good. The Tar Heels allowed opponents to complete just 55.8 percent of their passes (No. 6 in the ACC). North Carolina allowed just 180.8 yards through the air per game.

According to Sports Reference, UNC and Stewart held opponents to 250 yards or fewer through the air in 12 games last season — the most in the ACC.

Football Study Hall’s composite S&P-plus statistic ranked UNC as No. 69 nationally against the pass this past season. North Carolina allowed just 11 touchdowns through the air in 2016, which was fourth-fewest in the nation.

M.J. Stewart is a versatile defender; that’s part of why he was named to the Bednarik Award watch list. He can do more than defend the pass.

One of the strengths of Stewart’s game is his fearlessness at the point of the attack. The senior corner is unafraid to stick his nose in, and make a tackle. Stewart finished fourth on UNC’s roster last season with 48 tackles. According to Football Study Hall, Stewart alone accounted for over seven percent of the team’s total tackles.

Stewart recorded 3.5 tackles for loss, too, which was the most of any defensive back on North Carolina’s roster in 2016.