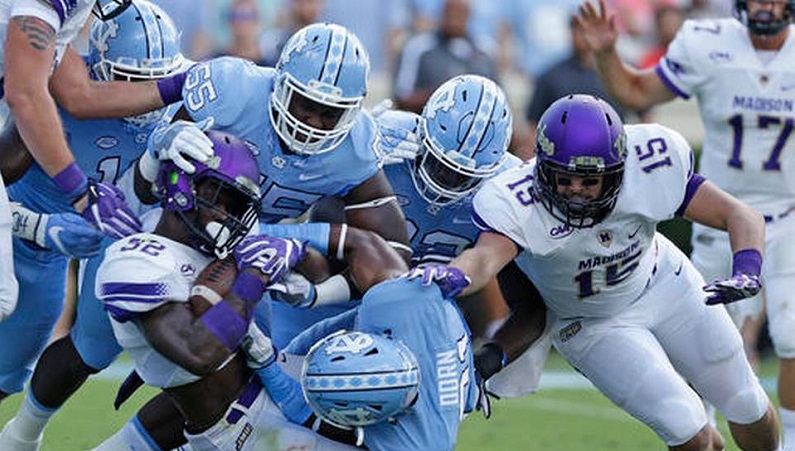 Look for UNC to be more aggressive on defense in 2017. (AP Photo/Gerry Broome)

If there’s any ACC program that has gotten used to changes at defensive coordinator over the past decade, it’s North Carolina.

In Papuchis, the Tar Heels are seeking some continuity amidst this whirlwind of change. Papuchis served three seasons (2012-14) as Nebraska’s defensive coordinator, so he’s not entirely new to the role.

As far as UNC’s current personnel, not much will change fundamentally from the way the Tar Heels lined up defensively under Chizik.

Carolina will employ elements of the 4-3 and the 4-2-5 defenses, utilizing nickel backs and other hybrid players, based on specific situations. The Tar Heels will still have four down linemen and four traditional defensive backs. The variances will come with the outside linebackers and the hybrid, nickel back players.

With a large group of returning contributors and a philosophy to stay the course, Papuchis isn’t reinventing the wheel this summer. So despite another change in defensive coordinators in Chapel Hill, not as much as changing with Papuchis as some might think.

However, with lots of veterans at linebacker and in the secondary, the Tar Heels will be afforded more opportunities to be aggressive. They will likely blitz and stunt more. They will be able to take more chances.

Some of the biggest changes in Papuchis’s first season as UNCs defensive coordinator will be who the Tar Heels actually have on the field.

Senior defensive end Dajaun Drennon is back after missing much of last season with injuries. UNC is also getting back Allen Artis, who played in just two games in 2016 prior to getting suspended. Artis was cleared in a sexual battery case, and was reinstated to the team.

Papuchis is inheriting a veteran defensive core, with senior Cayson Collins, and juniors Andre Smith and Cole Holcomb at linebacker. UNC also has seniors M.J. Stewart and Donnie Miles projected as starters in the secondary. Juniors Corey Bell and J.K. Britt will be challenging for starting roles as well come August.

Up front, UNC brings back seniors Drennon and Tyler Powell, as well as juniors Malik Carney, Jalen Dalton, and Jeremiah Clarke. Papuchis is optimistic that all this returning talent will bridge the gap between himself and Chizik.