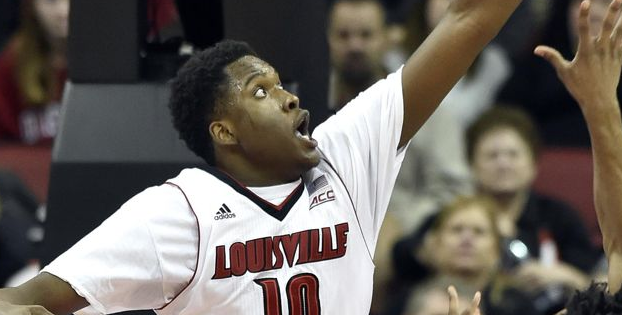 Chinanu Onuaku was a force on the glass last season for a Louisville team that ranked fifth nationally in offensive rebounding percentage — 38.5 percent, according to Ken Pomeroy. Onuaku is now a member of the Houston Rockets; Mangok Mathiang, another long-limbed member of the Cardinals, is back, but he’s coming off a foot injury that cost him all but 10 games in 2015-16.

Enter: forward Jaylen Johnson, who started off his junior season in blistering fashion.

In Louisville’s season opener against Evansville — a 78-47 victory for Rick Pitino’s club — Johnson accomplished several career highs: rebounds (14), points (19) and blocks (3). It was the first double-double of his career, too. Johnson followed that up on Monday night versus William & Mary with another 13 points (on eight shots) and nine rebounds.

Following the win over Evansville, Johnson mentioned that he’s been schooled by the coaching staff to watch the flight of the ball while it’s in the air. But grabbing boards is more than just tracking and positioning; these guys have to want the ball, and that’s the mentality Johnson brings to the paint every night. As he said after the team’s opener: “If it’s up, it’s mine; I gotta get it. That’s how it goes.”

Johnson is long-armed and athletic; he’s the prototypical Rick Pitino big man — a two-way player who isn’t afraid to get after it on the defensive end. Opponents are scoring just 0.65 points per possession with Johnson on the floor so far this season. He doesn’t have much shooting range, but he’s electric around the rim.

Through the first two games of the season, Johnson is shooting a team-high 73.7 percent from the field. You don’t need to run plays for him to score, either. For his career, Johnson has shot 50 percent or better from the field in 26 of his 56 games as a Cardinal.

Louisville ranks No. 1 in the nation in defensive efficiency, per KenPom. This is customary territory for Pitino’s program; the Cardinals have finished in the top five of points allowed per 100 possessions eight times in the last 15 seasons. Johnson and Louisville will face their first true test of the year when they square off with Caleb Swanigan and Purdue on Nov. 30.