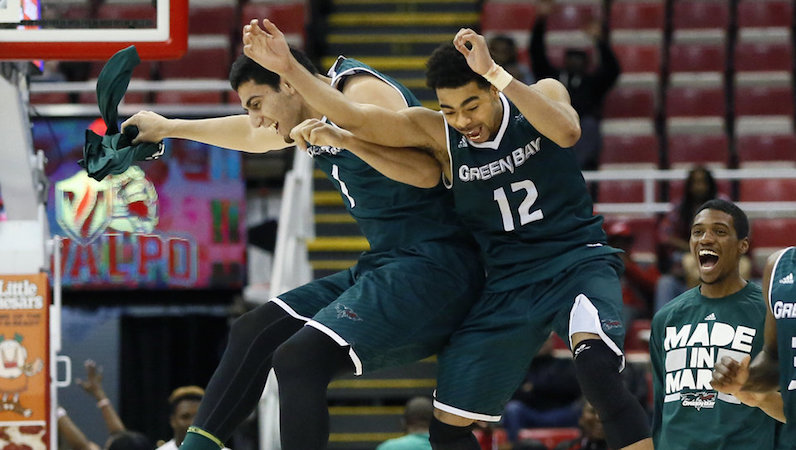 As soon as North Carolina finished cutting down the nets after its win over Gonzaga, college basketball turned the page to the 2017-18 season. Along with NBA decisions, other roster maneuvers will also take center stage with the transfer market. Enter Wisconsin-Green Bay power forward Kerem Kanter.

According to a report for ESPN’s Jeff Goodman, multiple ACC schools — NC State, Pittsburgh and Boston College — have expressed interest in Kanter. As a junior this season, he averaged 11.3 points per game. Kanter, by the way, is the younger brother of Enes Kanter — one of the NBA’s best reserve players.

NC State is in the process of putting together its debut roster for Year 1 of Kevin Keatts. Dennis Smith Jr., of course, has already declared for the draft. Pitt’s roster is a mishmash of confused toys. And Boston College has a dynamic backcourt but little in terms of scoring punch from the post.

All three ACC programs could use Kanter’s services, and here’s why.

Cleaning the glass, leaving a tip

Kanter is a strong offensive rebounder, which must make Enes proud. Kerem posted an impressive offensive rebounding rate of 10.6 percent — a number better than both Isaiah Hicks and Abdul-Malik Abu.

Per Synergy Sports, Kanter shot 54.8 percent on putbacks following an offensive rebound. That is a sturdy number; however, he was turnover prone. Kanter turned the ball over on 15.7 percent of these possessions.

Kanter was a strong finisher of the basketball this season for the Phoenix. In transition, he shot 64.3 percent and scored 1.11 points per possession. However, he did most of his damage out of the post in a half-court setting.

The post-up is Kanter’s preferred method of producing points. Per Synergy, over 32 percent of his possessions were spent on a post-up — more than any other play type. He recorded 115 post-ups, shot just a tick under 49 percent and scored 0.87 points per possession.

This season in the ACC, only three players recorded at least 100 post-ups and shot a higher percentage on said possessions. That trio is pretty darn good, too: John Collins, Bonzie Colson and Michael Young. All three of those guys were named to All-ACC rosters.

The Horizon League is not exactly the most stout of conferences; however, Kanter put in work against his team’s top nonconference opponent in 2016-17. In a 14-point defeat at Wisconsin, Kanter slapped up 18 points (7-of-13 from the field) and five rebounds.

That is solid, especially when you consider that Wisconsin finished the season ranked ninth in defensive efficiency and featured two rugged post defenders: Ethan Happ and Nigel Hayes.

Kanter had a nice performance against Kansas State as well — Green Bay’s other Power Five opponent. Kanter combined to shoot 10-of-19 (52.6 percent) against the Badgers and Wildcats.

Kanter will visit Xavier this weekend, according to Goodman.