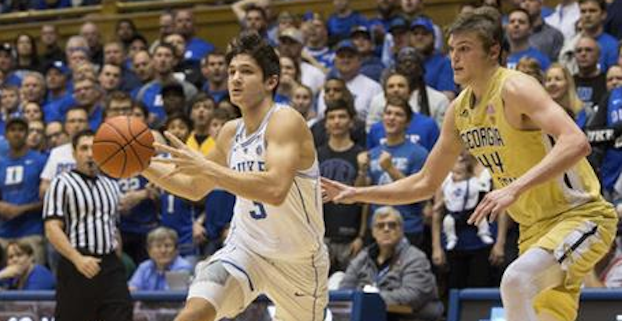 In Mike Krzyzewski’s final game before back surgery this week, Duke sent its coach out in style — clobbering Georgia Tech in Durham, 110-57.

Seven players scored in double figures as Duke eclipsed the 100-point mark for the first time in over a year.

The Blue Devils ended this thing early; it was never in doubt. They led by 17 points only 10 minutes into the game and never looked back. Duke made 16 three-pointers, shot 84.2% from the free-throw line and turned the ball over just 10 times (turnover rate of 11.3 percent). The team scored 1.55 points per possession; Georgia Tech, however, mustered just 0.80 points per possession.

This was a rout in every way imaginable. Here are a few observations from Duke’s last performance before Jeff Capel takes over for the next few weeks.

Things are getting less Harry, finally

Harry Giles had easily the most productive game of his career: 17 minutes, 10 points (on 12 field-goal attempts) and 12 rebounds, including seven on the offensive end.

All of these were career highs. This is an incredibly limited sample size (40 total minutes), but Giles has a rebounding rate of 30.2 percent. Duke ranks No. 35 nationally in offensive rebounding rate (35.5 percent), according to KenPom.com. With Giles, the Devils just now added another gifted rebounder to the mix.

Giles, who got the start against Georgia Tech, has played in just four games on the season, but Duke has only played twice in the last three weeks, which has helped ease Giles into the rotation.

Speaking of: now let’s get in rotation

Friend of the program Ben Swain of Sports Channel 8 pointed this out last night:

Those were the eight Blue Devils who played at least 15 minutes Wednesday night in Cameron Indoor. Duke’s head-coaching situation may be in flux, but as players get healthier and Grayson Allen has returned to the lineup (more on that in a moment), roles are becoming more defined.

If Duke does pare things down and use Chase Jeter mostly as a sub when foul trouble arises, then it can work on reads and communication — all of that valuable, intangible stuff.

Here’s the thing: With that eight-man group, Duke can play any style of basketball. Guys like Jayson Tatum and Luke Kennard can fill a couple different roles, which gives the coaching staff supreme flexibility.

I am not sure if that is enough u’s or not, but Luke Kennard continues to star as the best player in the ACC. The lefty is now 39-of-86 (45.3 percent) from three-point range. Against the Yellow Jackets, the sophomore poured in 16 points on just seven field-goal attempts.

Kennard, a double-figure scorer in every game this season, has only two performances where he has scored fewer points than shots attempted (Penn State, William & Mary).

Between the injuries and tripping incident against Elon, it has been an up-and-down season for Grayson Allen — and that is probably putting things mildly. Whether you agree with the fit of the one-game suspension or not, Allen played very well in his return to action: 15 points on five field-goal attempts and seven assists (one off his career high).

Some functions of Allen’s game have regressed, at least momentarily, during his junior season, though. After shooting 51.8 percent — and scoring 1.34 points per possession — on spot-up plays last season, the junior has dropped in both categories this winter: 43.6 percent shooting, 1.22 points per possession. Both of those numbers are still good, but it is not the efficiency of last season.

Duke’s offense, which ranks fourth in points per 100 possessions (120.5), has another gear in it if Allen can return to his sophomore form and cut out the sophomoric histrionics, too.