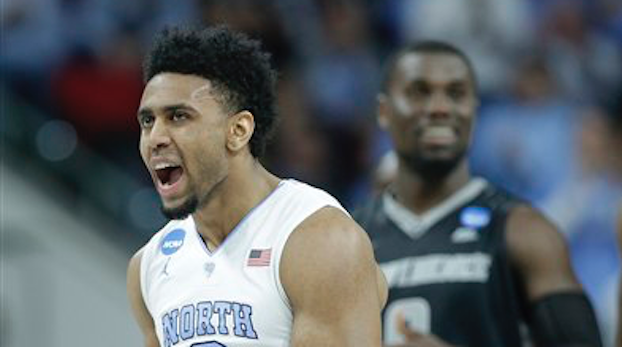 Brice Johnson was arguably the best player in the ACC in 2015-16.

The big man from Orangeburg, S.C., was also the sun that North Carolina’s offense revolved around. But while Johnson was the team’s star, UNC’s system wouldn’t have been able to function without the seemingly overnight development of point guard Joel Berry.

Berry didn’t just appear to get better and more comfortable as the year went along; that actually happened. Berry was money during UNC’s ACC title run and sprint to the Final Four. In nine postseason games, he threw up ridiculous averages: 14.8 points, 4.2 assists and 1.2 turnovers.

Berry shot 55.7 percent from the field, 43.2 percent on threes and 95 percent from the charity stripe (19-of-20) during that stretch. He scored in double-figures in all but one of those games — the Final Four victory over Syracuse when he scored eight points and dished out 10 assists.

This wasn’t just a flash in the pan over the course of three weeks. Berry was exceptional the entire season. As a sophomore, he played in all 40 games and made 39 starts (senior night was the lone exception). The Apopka, Fla., product scored in double-figures 33 times. North Carolina lost just seven times last season, and four of those occurred when Berry didn’t score 10 or more points.

With Marcus Paige’s jumper MIA for large chunks of the season, Berry was frequently UNC’s only reliable perimeter shooter. He launched 4.5 three-pointers per game (three more than his freshman season) and hit a robust 38.2 percent from distance, which led the team.

Berry will have even more on his plate as a junior, especially following the injury to wing Theo Pinson. Paige and Johnson are gone; this is clearly Berry’s team now.

If early returns are any indicator, the Roy Williams’ Tar Heels should be in good hands — Berry reportedly dominated the team’s scrimmage against Memphis. Two other blue-chip point guards had career years as juniors under Williams: Raymond Felton (2004-05) and Ty Lawson (2008-09). In both of those seasons, the Tar Heels won the national championship.

As a junior, ACC media named Lawson the league player of the year. His offensive rating (per Ken Pomeroy) of 134.3 points per 100 possessions was the best in the nation.

Could Berry — with plenty of skill around him — be in position for a Lawson-size jump in productivity? He doesn’t have the breakneck speed of Lawson, but UNC’s offense features the point guard.

Berry had a usage rate of 19.5 percent, according to Sports-Reference.com, which is below average. His usage and assist rates should jump heavily, and forward Isaiah Hicks is an intriguing pick-and-roll partner.

Berry will cause havoc, but it would go a long way if the Heels got some perimeter shooting to improve their spacing. He’s shown that when UNC’s initial actions don’t work, he can go get a bucket — regardless of how tight things are around the basket:

This is from their Elite Eight win over Notre Dame. The double-staggered screen set by Johnson and Berry doesn’t free Nate Britt for a jumper. Britt flips and re-screens for Berry, who is able to get to the rim and finish against an Irish defense that has all five defenders within 15 feet of the rim.

Ken Pomeroy has the Tar Heels projected to be the third-most efficient offense in the nation: 115 points per 100 possessions. For that to happen, though, Williams will need more of this from his point guard, who seems poised to make the proverbial leap. Berry didn’t even make All-ACC Honorable Mention last season; that will change in 2016-17.