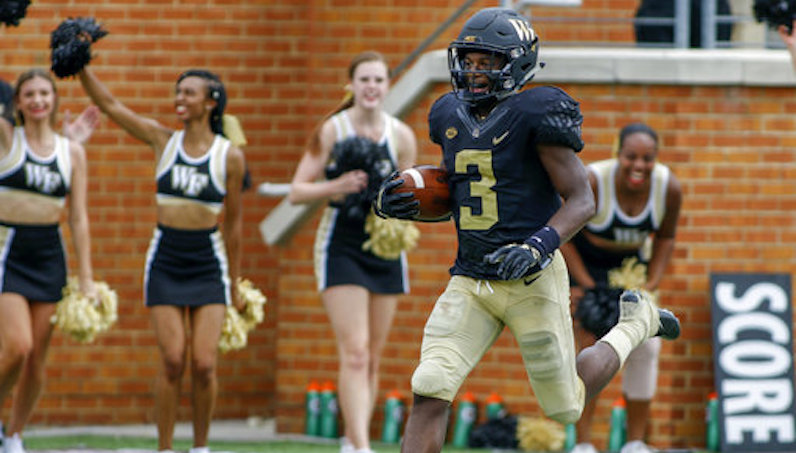 Wake Forest punt returner Greg Dortch runs back a punt for a touchdown against Towson in the first half of a NCAA college football game in Winston-Salem, N.C., Saturday, Sept. 8, 2018. (AP Photo/Nell Redmond)

The Atlantic Coast Conference Football Players of the Week have been recognized following their performances in Week 2 of the 2018 season.

Jones completed 16 of 22 passes for 192 yards and three touchdowns before leaving Saturday’s 21-7 win at Northwestern due to injury late in the third quarter • Jones posted a pass efficiency rating of 191.04 with second-quarter touchdown passes of 7, 9 and 52 yards • He became the fourth quarterback in Duke history to throw three or more touchdown passes in a quarter.

Dillon scored three times in the first quarter, on runs of 7, 74, and 7 yards in the Eagles’ 62-14 win over Holy Cross • He finished the game with six rushes for 149 yards – an average of 24.8 yards per carry – all of which came before making an early exit before the end of the first quarter • Dillion is one of only three players in college football since 1996 to score three touchdowns on six or fewer carries with an average rush of 24 yards or better in a single-game.

Higgins posted the second 100-yard receiving game of his career in the Tigers’ road win over Texas A&M • Higgins gained 123 yards on three receptions, including a 64-yard touchdown catch.

Hyatt was credited by the coaching staff with a 90 percent grade in the second-ranked Tigers’ 28-26 win at Texas A&M on Saturday night • Hyatt’s effort included  three knockdown blocks and no sacks allowed as he helped Clemson amass 413 total yards.

Ferrell recorded two sacks in a game for the third time in his career in Saturday night’s win over Texas A&M • Ferrell also caused the game’s first turnover, forcing a fumble by Texas A&M quarterback Nick Starkel that was recovered by the Tigers’ Justin Foster.

Humphreys logged a game-high 15 tackles in a 21-7 road win at Northwestern • Humphreys had five tackles for no gain and one for a loss of three yards • He was credited with tackles on two third-down stops as the Blue Devils held Northwestern scoreless for the final 54:50 and snapped the Wildcats’ winning streak at nine games (longest active streak among Power 5 teams entering the contest).

Thornhill had several key plays in UVA’s 20-16 loss at Indiana • He finished the game with seven tackles, including five solo stops • He blocked a PAT in the first quarter and returned it for a two-point conversion • Thornhill later intercepted a Hoosier pass in the third quarter.

Playing in just his second career game, Thomas had nine receptions for 114 yards in the Wolfpack’s 41-7 win over Georgia State • It marked the highest receiving total by a Wolfpack freshman since 2011 and the earliest that a freshman has posted a 100-yard game • He added a 56-yard pass completion on a trick play.

How does Duke football try to replace Daniel Jones and Mark Gilbert?