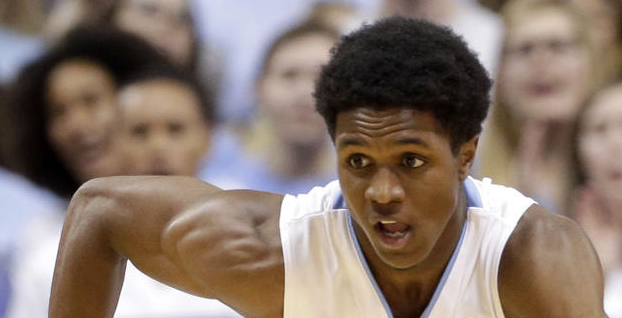 Kenny Williams has made nearly 43 percent of his 3-pointers this season (AP Photo).

Kenny Williams has emerged as one of the ACC’s best early-season success stories. After a freshman season that saw Williams play just 122 minutes, the former VCU commit has become a serious shooting threat for one of the best offenses in America.

The sophomore has connected on 13 of 35 three-pointers (42.9 percent), which is one of the best shooting clips in the league.

The 2016-17 season is just a dozen games old for the Tar Heels; however, it’s become clear how impactful the shooting of Williams can be for this offense. In the two games the Heels have dropped this year, Williams went a combined 0-of-2 from beyond the arc. Williams played just 17 minutes at Indiana and spent most of Saturday afternoon in Las Vegas chasing around Kentucky’s Malik Monk, who was essentially engulfed in flames for the entire game — 47 points on 28 field-goal attempts.

According to Adrian Atkinson of The Secondary Break, Williams defended Monk for 40 of North Carolina’s man-to-man possessions. Guess what? It’s super difficult to chase around an opposing team’s top perimeter threat while also looking for your own offense.

UNC relies on bully-ball to create a lot of its offense — get a shot up on the rim and allow the frontline of offensive rebounding menaces to dominate the glass. Freshman big man Tony Bradley has proven to be especially good in this department — he ranks No. 1 in the nation in offensive rebounding rate (22.1 percent).

North Carolina, however, for the first time in years, has multiple players — Williams, Joel Berry and Justin Jackson — capable of drilling catch-and-shoot three-pointers. This gives Bradley, Kennedy Meeks and Isaiah Hicks more space inside the lane; it also means Berry doesn’t have to navigate a pick and roll in an airplane bathroom. The offense can breath a little more.

The Tar Heels will, wisely, run actions that involve Williams or Jackson setting a screen for the other off the ball, which is difficult to defend.

North Carolina ran this exact same action in the following game against Tennessee. The only difference: Williams ran through the elevator door screen from the two bigs, as opposed to curling around it.

The Golden State Warriors crater NBA defenses when Stephen Curry and Klay Thompson run their split cuts off one another, or when Curry sets a back screen for Kevin Durant. The screener all of a sudden becomes the most dangerous chess piece on the floor as the defense scrambles to contain the player who should be popping free off the pick.

Defenses would love to be able to switch on these actions, but that defensive utopia is not always possible. The personnel on the floor may not allow for it. Sharp communication and like-sized players are super important for defenses to get switchy and rotate on a string. However, if teams switch on this action, it will almost certainly mean a smaller defender on Jackson, who can use his frame to back down and get to his sweet spots closer to the restricted area.

Williams and Jackson aren’t in the same universe as Curry, Durant and Thompson — intercosmic stars who can get buckets in multiple dimensions. But the principles remain the same: The gravity their shooting commands can bend and warp defenses in ways that haven’t been seen in several seasons in Chapel Hill. It will be curious to see if UNC finds ways to leverage multiple plus-perimeter shooters on the floor at the same time. Berry’s no slouch from the outside, either — 43.8 percent (67.2 percent true shooting).

North Carolina gets less than 24 percent of its total points from beyond the arc. That could change as the season progresses, though.

The offense could become more diversified, which would be a good thing. UNC scored 100 points without one of its most accurate snipers connecting on one three-pointer; in fact, Williams attempted just two shots against the Wildcats in a career-high 34 minutes.

Going forward, though, the Tar Heels have another player to feature on an offense that ranks sixth in the nation in offensive efficiency.