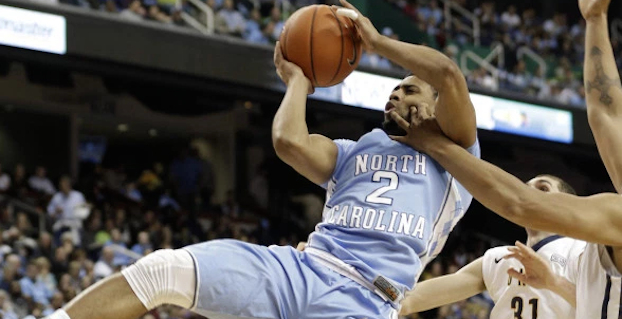 Joel Berry has paced the Tar Heels through the non-conference portion of the 2016-17 season. (AP Photo).

A few weeks back we discussed that the North Carolina Tar Heels would have a new face of their program in 2016-17: Joel Berry. It’s incredibly early in the season, but Berry is making sure the transition is as quick as it is smooth.

The junior point guard dazzled in the team’s first two games — wins over Tulane and Chattanooga. He scored a career-high 23 points in the victory of the Green Wave.

Berry’s averaging 20.5 points, 4.5 assists, five rebounds and one turnover per game. But those aren’t the only positive indicators.

Berry’s 41 points have come on just 19 field-goal attempts. He got to the foul line (.79 FT%) and connected on his threes (54.5 percent); over half of his shots have come from beyond the arc (11), including this catch-and-shoot trey courtesy of Kenny Williams.

It’s this kind of efficiency that can lead a player to post a true shooting rate of 78.5 percent and a player efficiency rating (PER) of 33.1 — the third-highest number among ACC players who have played at least two games (John Collins, Keyshawn Woods). Chattanooga is no joke, either. The Mocs won 29 games last season, and Ken Pomeroy has them rated as the No. 87 team in the nation. Berry scored 18 points on eight shots in that matchup, and according to KenPom, he posted a team-high offensive rating of 172, which is outstanding.

The junior point guard has assisted on 23.5 percent of his team’s made field goals when he’s been on the floor, too — an increase over last season (19.4 percent). Playmaking duties are largely his responsibility, and Roy Williams will need this clip to stay high. Eli Carter of Boston College led the ACC in assist rate last season (31 percent).

Usage rate is another metric that should be tracked for Berry. He’s used 20 percent of North Carolina’s possessions thus far when he’s been on the court, which is about average. The Heels will need Berry to take over offensively for them during portions of this season, and when that happens, expect this rate to rise.