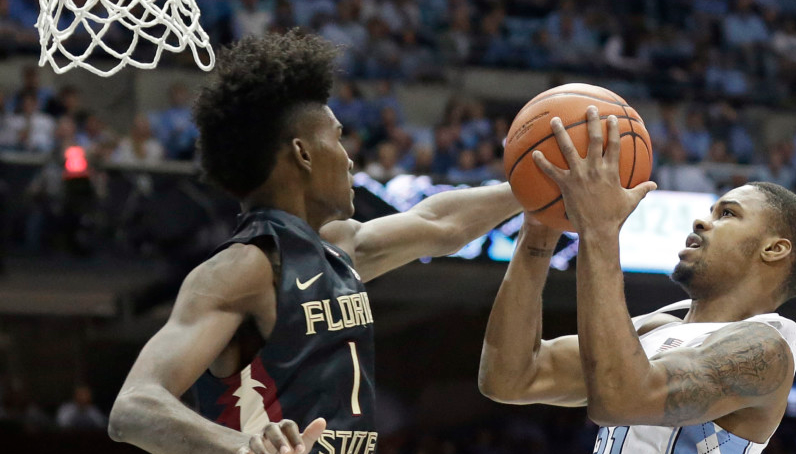 The big fellas may be on the undercard when it comes to the 2017 draft, but there are some fantastic frontcourt prospects in the mix, too. The best of that bunch, however, happens to reside (only for a little bit longer) in the ACC: Florida State’s Jonathan Isaac.

Isaac, a freshman power forward, possesses a 7-1 wingspan that allows him to rebound at a ridiculous clip. He ranks 59th nationally in defensive rebounding rate (24.8 percent), per KenPom.com.

Isaac is clever on the offensive glass as well. He ranks 17th in the ACC in offensive rebounding rate (8.1 percent), and when he snags boards, he knows exactly what to do with the rock. Per Synergy Sports, Isaac shoots 89 percent on putbacks that follow an offensive rebound; only Syracuse’s Tyler Lydon, another NBA prospect, scores at a better rate (92.9 percent).

Isaac shoots 78.6 percent on cuts, scoring 1.5 points per possession, according to Synergy Sports — third-best in the ACC.

Of ACC players who have at least 40 non-post-up possessions around the basket, Isaac ranks third in the conference in field-goal percentage (71.7 percent) and points per possession (1.46), according to Synergy. This is the formula for 63.2 percent on two-point field goals — also third-best in the league.

Grabbing offensive rebounds and scoring efficiently around the basket are great, but that’s not the differentiator with Isaac. What has drawn much of the buzz is Isaac’s ability to step away from the hoos and splash perimeter jumpers. Isaac shoots 38.5 percent on three-pointers, which is the second-best rate on FSU’s roster. Isaac’s shot (remember that wingspan) is essentially unblockable, and on catch-and-shoots the freshman has connected at a solid 40 percent clip. His shooting mechanics and motion are textbook; he has the ability to add range to his jumper.

Isaac has flashed legitimate two-way ability. He ranks fourth in the ACC in block rate (6.2 percent), and he’s been even more dismissive in league play. Against conference foes, Isaac has turned the territory around Florida State’s hoop into a no-fly zone — rejecting nearly eight percent of the shots he’s faced. Overall, opponents are shooting just 39 percent on field goals defended by Isaac.

This combination of skills is what makes the rookie so extraordinary. He can score efficiently from anywhere as soon as he crosses half court. He can get his own shot in isolation. Oh, and he can defend a variety of positions, while also protecting the basket.

It’s all such a rare blend of talent. The sky is the limit.

Kevin Durant of the Golden State Warriors is Isaac’s favorite NBA player; KD also happens to be a frequent pro comparison for Florida State’s stud freshman. When Durant was at Texas, he won the 2007 Naismith Award as a freshman. Isaac won’t get anywhere close to touching Durant’s counting stats — he plays just 25 minutes per game in FSU’s crowded rotation — and it’s a bit silly to compare a freshman in college to the second-best basketball player in the world. But Isaac edges out KD in a few discrete categories.

According to Synergy, during the 2006-07 season at Texas, Durant shot 61.8 percent on putbacks, 53.8 percent on non-post-ups around the basket and 59.5 percent on cuts. All of those are lower than Isaac’s percentages.

Florida State can be as good as any team in America, and that’s largely because Isaac is a truly special player. He’s a one-of-a-kind player in college ball this season. Catch him while you can, because he won’t be in the ACC for much longer.