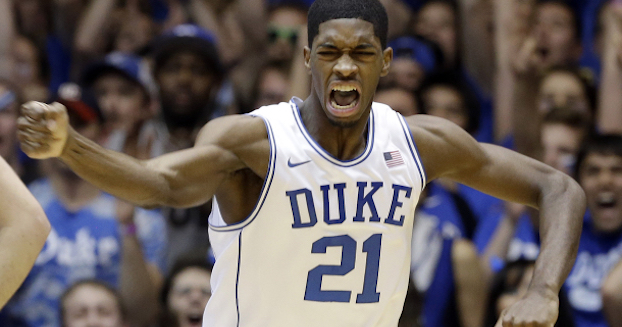 Amile Jefferson is second in the ACC in rebounds per game (10.1). (AP Photo).

Stakeholders of the Duke basketball program have held a collective breath since Saturday afternoon when Amile Jefferson went down with a foot injury against Boston College — the same right foot that forced the big man to miss all but nine games in 2015-16.

Here's the play where Duke's Amile Jefferson went down with injury today against Boston College pic.twitter.com/PSQzHtXflg

Jefferson is a special player whose leadership and communication skills on defense are intangibly valuable to Duke. However, his numbers and production are darn good, too. The Philadelphia native is one of just two ACC players — along with Notre Dame’s Bonzie Colson — to average better than 10 points and 10 rebounds per game.

This has been the best season of Jefferson’s extensive career in Durham, which says a lot considering what the Blue Devils have achieved in the last five years. He’s averaging career highs in points (13.6), defensive rebounding rate (26.4 percent), PER (26.6) and usage rate (20.5 percent).

Jefferson draws a ton of fouls, too. In fact, according to KenPom.com, Jefferson, who shoots 10.2 free throws per 100 possessions, draws 5.6 fouls per 40 minutes. His free-throw rate (the number of free throws to field-goal attempts) of 66 percent ranks 48th in the nation. He commands attention and can force contact — a serious element of Duke’s offense.

It simply can’t be stated enough: The chemistry shared between Jefferson and Luke Kennard in Duke’s half-court sets has been a major boon for the Blue Devils. The dribble handoff action has been borderline unstoppable.

After playing limited minutes together before Jefferson’s injury last season, it’s clear that a connection was formed between the two players. Kennard ranks in the 96th percentile in points per possession from handoffs (1.52), according to Synergy.

Dribble-handoff action isn’t the only way Jefferson frees up his perimeter teammates for clean looks at the basket; he’s a solid setter of screens, which is critical in Duke’s motion offense. Per Synergy, Duke is shooting 45 percent off of screens this season. The Blue Devils score 1.09 points per possession off screens, which ranks No. 51 in the nation.

Jefferson also functions as a hub in the high post for ball reversals. Duke could throw the ball into Jefferson close the the free-throw line and let him look for cutters running splits and shooters on the opposite side of the floor. It’s not a coincidence that Jefferson was also posting career highs in assist rate (13 percent) and assists per 100 possessions (4.1) before this setback.

Duke ranks fifth in the nation in offensive efficiency; the Blue Devils are one of just seven teams to score better than 1.2 adjusted points per possession. Jefferson was more than just a bunch of points and rebounds; his game — both with and without the ball — allows that offense to flow. Opponents always had to account for his gravity in the lane.

While Duke’s offense would greatly miss what Jefferson brings to the table, the defense, which has had issues curtailing dribble penetration, may suffer even more if he is to miss significant time. Jefferson is averaging a 1.6 blocks per game — another career best.

Kennard has been Duke’s best player; Jayson Tatum is the team’s top NBA prospect; but Jefferson is the most indispensable player on the roster. His value above replacement is extraordinary. This is a team that can absolutely win a national championship in 2017, but that picture becomes far more cloudy sans the veteran big man. If he is to miss time, then Duke will need freshman Harry Giles to take on a much larger share of minutes and responsibilities.

As we await word, keep it locked on ACCSports.com for the latest updates on Duke’s Amile Jefferson.