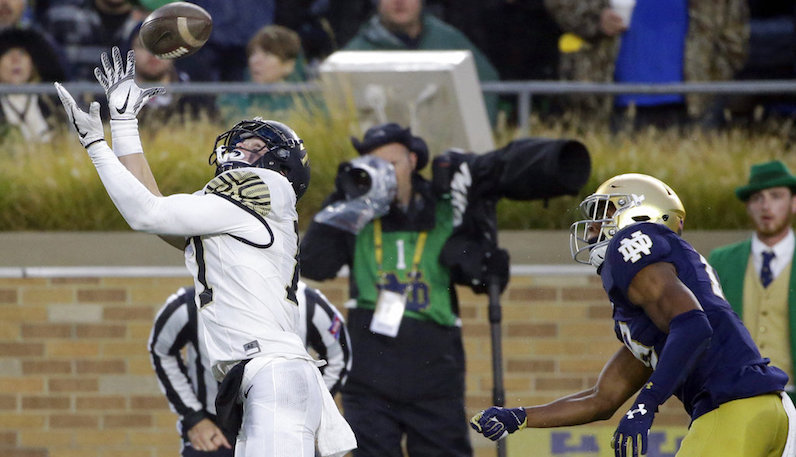 After freshman wide receiver Greg Dortch went down with a season-ending injury, Wake Forest was left looking for answers on offense. On the road against a powerful Notre Dame defense, Dave Clawson may have found a possible solution. Alex Bachman stepped up.

Prior to the loss at Notre Dame, Bachman had only four receptions for 74 yards in 2017. However, against the Irish, Bachman caught a career-high eight passes for 116 yards and a touchdown. The junior became just the 11th player in the ACC this season to have 100-plus yards receiving on at least eight receptions and a touchdown.

Against Notre Dame, John Wolford attempted 45 passes; that’s the most he’s thrown in a game since his freshman season at Utah State. A good chunk of those went in the direction of Alex Bachman.

Bachman was one of two Wake Forest pass-catchers to receive at 10 targets up in South Bend — Scotty Washington was the other. According to Football Study Hall, Bachman caught eight of his 10 targets, for a catch rate of 80 percent.

The highlight of his day came late in the third quarter when Bachman hauled in a 30-yard dime from Wolford for his second touchdown of the season.

That touchdown came after Bachman smoked Troy Pride Jr., a former top-100 recruit, on a go pattern. Pride, by the way, runs tracks at Notre Dame, too.

Wake Forest ranks inside the top 10 of the FBS in terms of passing S&P-plus and Success Rate, per Football Study Hall. For that to keep up, and for the Deacs to snag that ever-important sixth win, Alex Bachman need to continue to become a bigger part of the offense.