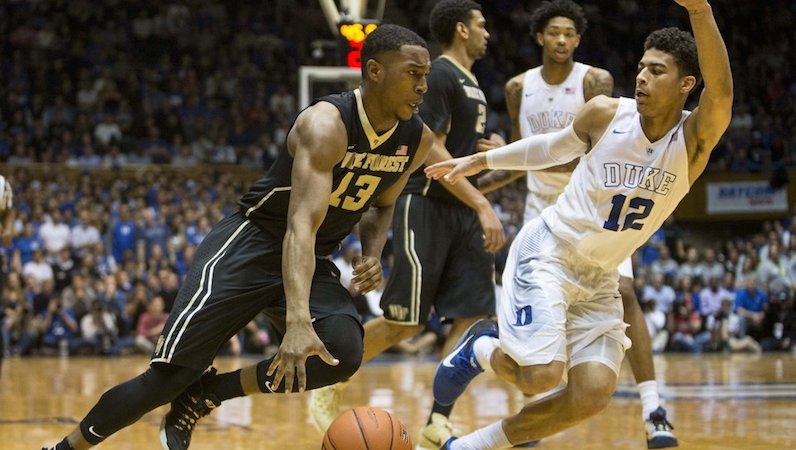 When Bryant Crawford plays basketball, his main goals are leading Wake Forest to more victories and to success in the postseason.

But along the way, he probably wouldn’t mind getting a little bit of respect for his own play. Strangely, Crawford has found that respect difficult to come by.

He joined Dennis Smith Jr. – who was the ninth pick in the NBA draft – as the only ACC players to average more than 16 points and five assists.

Advanced statistics showed Crawford’s impact as well. For example, in offensive box plus/minus (BPM), Crawford ranked third in the league, according to sports-reference.com. That stat estimates a player’s performance relative to league average, which is 0.0. Crawford’s 7.1 ranked behind only Luke Kennard’s 8.4 and Justin Jackson’s 7.5. Both were top 15 picks in the NBA draft.

Yet Crawford couldn’t even make any of the three All-ACC teams or garner an honorable-mention notation in the official voting (done by the coaches and select media). In the voting by the Atlantic Coast Sports Media Association, Crawford edged in at the bottom of the honorable-mention voting.

Certainly, Crawford ranks behind some of the top players: Guards voted ahead of him included NBA draft picks Kennard, Donovan Mitchell, Smith Jr. and Dwayne Bacon. They also included players such as Joel Berry II and Andrew White III, who also had excellent seasons.

But then the list gets shaky. Six other guards received more votes: London Perrantes, Davon Reed, Matt Farrell, Jerome Robinson, Steve Vasturia and Seth Allen. None of them posted numbers like Crawford’s, and by the time you get to Vasturia and Allen, it’s really head-scratching.

But that was last season. Certainly with many of those names cleared out, including his teammate and All-ACC first-teamer John Collins, Crawford will get more respect, right?

Well, not judging by the preseason All-ACC voting done by media at Operation Basketball. Crawford didn’t make either of the two teams that were announced. Players ahead of him included Bruce Brown Jr. of Miami, Quentin Snider and Deng Adel of Louisville, Josh Okogie of Georgia Tech and Robinson of Boston College.

Brown Jr. and Okogie had excellent freshman seasons last year, but their votes are based on potential, as their numbers don’t match what Crawford did last season. Robinson is the league’s top returning scorer, but he also finished second in the league in turnovers and shot 42 percent from the field and 33 percent from 3-point range.

The Louisville choices are the most odd, however. As a junior last season, Snyder averaged 12.4 points, 4.1 assists. He didn’t contribute much elsewhere and shot 38.5 percent from the field. As a sophomore, Adel averaged 12.1 points and 4.5 rebounds.

Perhaps voters still have the image of the freshman Crawford in their minds: turnover-prone and taking bad shots. But that version of Crawford only showed up here and there last season.

While these slights don’t really mean anything significant, Wake Forest can only hope that they add motivation for Crawford to have an even better season.

Read more: Can Thompson, Moore give Danny Manning and Wake Forest inside production in 2018?