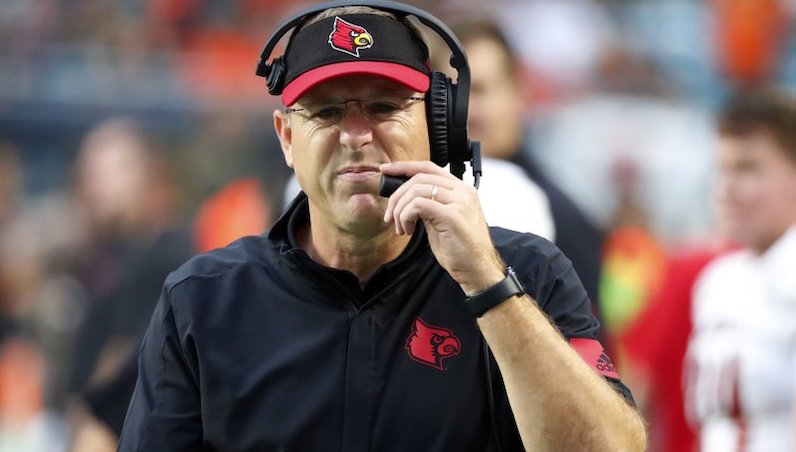 Louisville head coach Scott Satterfield grimaces as he walks the sideline during the first half of an NCAA college football game against Miami, Saturday, Nov. 9, 2019, in Miami Gardens, Fla. (AP Photo/Wilfredo Lee)

In this week’s ACC Football Power Rankings, we get ready for Round 2 with Notre Dame and Clemson, admire the effort from NC State LB Payton Wilson and look ahead to UVA-Virginia Tech.

With a 45-21 win in the home finale over Syracuse behind them, undefeated Notre Dame now has its schedule clear for a rematch with You Know Who.

As a member of the ACC, can the Irish go 1-for-1 with league titles?

More here on the ACC schedule changes. Bottom line: Clemson did not want to play Florida State, and the ACC was not going to strong arm them into it. So if they were gonna be off next weekend, so was Notre Dame. The rest fills in some blanks. https://t.co/EawTuKrvN4

Trevor Lawrence didn’t have his best stuff up at Virginia Tech, but Clemson’s defense dominated: 12 tackles for loss and three turnovers forced.

Clemson has won five straight ACC titles; the Tigers will have their shot at six two weeks from now in Charlotte.

Miami looked as powerful as it has all season with a 48-0 blowout win over Duke. Defensively, the Hurricanes bottled up the Blue Devils — 13 tackles for loss, five forced turnovers, including four fumble recoveries.

On the other side of the ball, D’Eriq King shared the wealth. King (10.3 yards per attempt vs. Duke) connected with three different receivers for touchdowns: Brevin Jordan, Dee Wiggins and Mike Harley.

While UNC ran for 251 yards and five touchdowns, Sam Howell completed 20-of-23 pass attempts in a 49-9 win over Western Carolina.

Michael Carter punched in three rushing touchdowns — for the second time in his career. Carter now has 20 career rushing scores at North Carolina.

Once again, it wasn’t pretty, but NC State got the job done — downing Georgia Tech in Raleigh 23-13. The star of the game was linebacker Payton Wilson, though, who recorded 11 tackles (2.5 for loss) while playing with two dislocated shoulders. Wilson leads the ACC with 108 tackles.

It’s been a strange season for college football, but NC State kept chugging along; the seven ACC wins mark a program record.

Game is over … NC State completes its regular season at 8-3 overall and 7-3 in the ACC. It sets a school record for conference wins in a season.

Next up: Bowl SZN

If you forgot that Wake Forest is a good football team, well, that’s totally understandable; it’s been a while since the Demon Deacons played a game. However, that changes next Saturday at Louisville.

All season long, the deeper team analytics have continued to spit out the same evaluation: Virginia is a good and undervalued football team. That may have been tougher to see when the ‘Hoos were 1-4; however, UVA has surged over the back half of the schedule. Behind a monster performance from QB Brennan Armstrong — 417 total yards, two touchdowns — Virginia defeated Boston College, the team’s fourth straight victory.

Now, Virginia has the chance to win two back-to-back matchups with Virginia Tech for the first time since 1997-98.

Following an open weekend, Pitt will finish off its 2020 regular season with a Thursday night showdown vs. Georgia Tech.

Tip of the cap to Pitt and its two studs along the defensive line: Rashad Weaver and Patrick Jones. Weaver’s successful run this season is one of the better stories in the ACC, as he returned from injury. Playing without All-ACC tackle Jaylen Twyman this year, Jones and Weaver really made an impact along the defensive front.

Going up against a strong UVA defense, Boston College started the game (its regular season finale) in a hole — down Phil Jurkovec and David Bailey. Without Jurkovec, Dennis Grosel took over at quarterback and had no issues letting it fly: 32-of-46 pass attempts for 520 yards (11.3 yards per attempt), four touchdowns and three interceptions.

Just the second player in BC history with 9 receiving TDs in a season.@ZayFlowers // #ForBoston🦅 pic.twitter.com/pcCCYIvIZf

As usual, the primary targets for BC were wideout Zay Flowers and tight end Hunter Long, who combined for 16 catches, 289 yards receiving and three touchdowns. Flowers and Long have each had excellent 2020 campaigns.

On second thought, maybe don’t do that!

Here's the full comment from Scott Satterfield on how it's different from coaches and players when it comes to balancing commitment. pic.twitter.com/6LYGRUJfV0

There’s still a lot of work to be down at Georgia Tech. The 2021 season looms large for Geoff Collins and the Yellow Jackets.

Duke hasn’t won fewer than three games in a season since before David Cutcliffe arrived in Durham: 2007, the final year for Ted Roof. Duke has never beaten Florida State in football: Can the Blue Devils get off the two-win line this Saturday in Tallahassee?

Florida State is still looking for its second conference win of the season.

A long, trying season has finally concluded for Syracuse. Looking ahead to 2021: the program received news this week that quarterback Tommy DeVito plans to return.