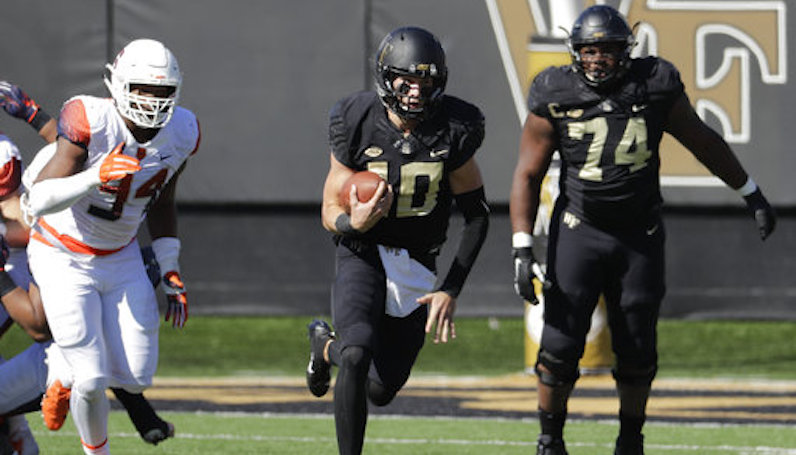 According to a report from Les Johns at Demon Deacon Digest, Wake Forest will be without freshman quarterback Sam Hartman for the rest of the 2018 season. Hartman injured his right leg in Saturday’s homecoming loss to Syracuse. The rookie quarterback was hit late in the game and never returned; Hartman was unavailable for postgame interviews, per Johns.

BREAKING: Wake Forest freshman quarterback Sam Hartman to miss the rest of the regular season with a leg injury. https://t.co/WeUaXLqGEe

As a true freshman, Hartman has led one of the fast-paced offenses in college football. In fact, Wake Forest runs 89 plays per game — No. 1 in the FBS, according to Team Rankings. He’s had some nice moments, too: 16 touchdown passes, a Wake Forest freshman record.

Hartman has completed 55.3 percent of his passes and has averaged 6.8 yards per pass attempt. He’s also run for 275 yards and two touchdowns, too.

At 4-5, Wake Forest needs to win at least two of its three remaining games — NC State, Pitt and Duke — to become bowl eligible for a third straight season. Even prior to Saturday’s loss, Football Study Hall was not projecting Wake Forest to win 6+ games.

Similar to Duke, Wake Forest has been ravaged by injuries this season; Hartman is the latest addition to an unfortunate list.

It's college football. Injuries happen. But what Wake Forest has sustained this season is just other-worldly. 12 total guys now lost for the entire season, nearly all of whom were in (or projected to be) in the 2-deep.

Due to COVID-19, Wake Forest’s Dave Clawson to isolate from wife during season

Wake Forest football vs. Notre Dame will remain in Charlotte