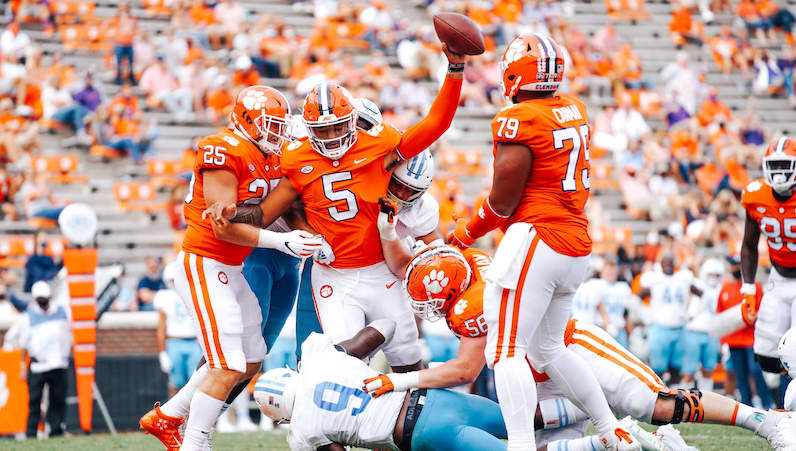 Freshman Clemson quarterback DJ Uiagalelei scores one of his two rushing touchdowns against The Citadel. (Photo courtesy of Clemson Athletics)

Following a monster performance from Jahmyr Gibbs of Georgia Tech, it’s time for our second installment of 1-and-5: a weekly look at five impact rookies from around the ACC.

During his college debut, Gibbs delivered on the preseason hype: 126 yards from scrimmage and two touchdowns on 19 touches. Going up against UCF, Gibbs, a prized recruit, carried the ball 15 times for 66 yards and a touchdown.

Gibbs doubled as Georgia Tech’s leading receiver, too: four catches for 60 yards, including a 9-yard touchdown. He became the first Georgia Tech player since J.J. Green in 2017 to record both a rushing and receiving touchdown in the same game.

A factor on special teams, also: Gibbs returned two kickoffs for a total of 93 yards.

Jahmyr Gibbs!!! What a return to start his career. pic.twitter.com/uiiI2EmQjr

Addison was Pitt’s leading receiver in the win over Syracuse: seven catches for 57 yards and his first career touchdown. He also ran for 24 yards on three carries.

Murphy entered the 2020 season as arguably the most talented freshman defender in the country. Early on, he’s delivered on his decorated prep ball reputation. During the blowout win over The Citadel, Murphy recorded two more tackles for loss. Murphy also forced a fumble in the first quarter, which turned into a 17-yard scoop-and-score for linebacker James Skalski.

Tell ya what, Myles Murphy is off to an incredible start to his Clemson career.

Uiagalelei, another 5-star prospect in Clemson’s 2020 class, completed 8-of-11 pass attempts for 75 yards and rushed three times for seven yards with two touchdowns vs. The Citadel. With this performance, Uiagalelei became the first freshman Clemson quarterback with two rushing touchdowns in a game since Kelly Bryant at Miami in 2015.

First of Many for DJ

Gibbs, however, wasn’t the only ACC rookie running back to score on the ground and as a receiver; Miami’s Knighton, a ballyhooed 2020 prospect, doubled up, too.

After rushing for 59 yards on nine carries against UAB, Knighton ran the ball four times during the win at Louisville — one of which went for a 3-yard touchdown. Knighton also broke this game open in the third quarter.

Following a Tutu Atwell touchdown, Louisville pulled within seven points of Miami. On the very next play from scrimmage, though, Knighton slipped out of the backfield and housed a 75-yard catch-and-run against busted coverage.