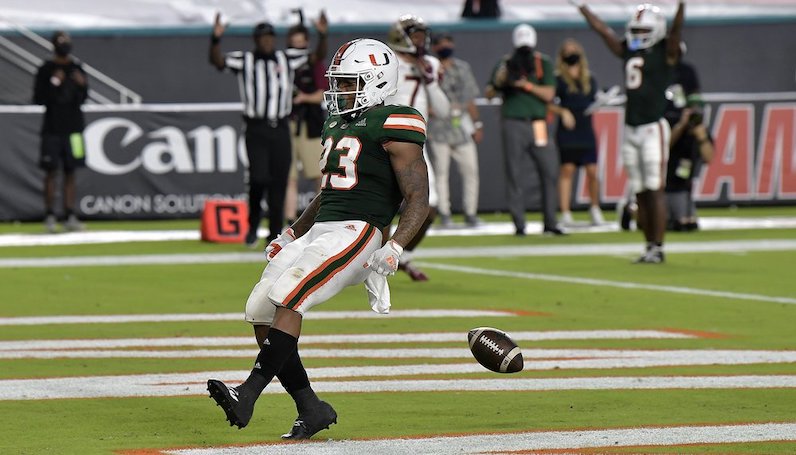 Miami running back Cam'Ron Harris scores a touchdown against Florida State during the first half of an NCAA college football game Saturday, Sept. 26, 2020, in Miami Gardens, Fla. (Michael Laughlin/South Florida Sun-Sentinel via AP)

After breezing through a 2-0 start, Clemson is coming off an open week before returning to conference play: hosting Virginia.

Following another round of positive COVID-19 tests within the program, Notre Dame made the call to postpone Saturday’s matchup (9/26) at Wake Forest; that game will now take place on Dec. 12.

Notre Dame has an open week on the horizon; after that, the Irish will play a Florida State program that’s trapped in quicksand.

Notre Dame makes this official. Seven positive tests on Monday, the school said. "Combined with last week’s testing results, a total of 13 players are currently in isolation, with 10 in quarantine." https://t.co/M7lNlU2hcO

Last Saturday quickly turned into a Hurricane party as Miami beat Florida State for the fourth consecutive time, and did so in style: hanging 50+ points on FSU for the first time ever.

After catching just two touchdown passes all season in 2019, tight end Brevin Jordan now has a touchdown grab in all three games this year.

Cam’Ron Harris ran for two more touchdowns, which gives him five rushing scores in three games. D’Eriq King (No. 8 nationally in ESPN’s QBR) was once again hyper-efficient: 29-of-40 through the air (72.5 percent completion rate) for 267 yards and two touchdowns, including a 40-yard bomb to Dee Higgins.

For the second straight game, Pitt’s pass rush recorded seven sacks, while the Panthers defeated Louisville 23-20. Patrick Jones led the way with three sacks; he was followed closely by Rashad Weaver, who recorded 1.5 sacks in his second game back.

It wasn't hard to find Patrick Jones for @Pitt_FB against UofL — dude lit up the stat sheet but it was the way he won that impressed me. He won with an array of pass-rushing moves and his athleticism just JUMPS off the screen.@P_jones9 is a legit All-American kinda dude. pic.twitter.com/gVxZVwrlLb

It’s been over two weeks now since UNC last took the field for a game; however, Mack Brown has managed to stay busy. Last Friday, North Carolina landed a commitment from 4-star offensive tackle Diego Pounds — who many believed was bound for Penn State.

Down 23 players, including projected starting quarterback Hendon Hooker, and four coaches due to COVID-19, Virginia Tech made easy work of NC State. The Hokies jumped out to a 17-0 lead in the first quarter and never looked back, winning 45-24.

#Hokies acting DC tonight, Ryan Smith, 29, is a 2014 graduate of William & Mary, where he played cornerback. Justin Fuente hired him in offseason from #JMU.

Braxton Burmeister got the start in place of Hooker; before injuring his hand, the Oregon transfer looked good, too. Burmeister completed 7-of-11 passes and ran for 46 yards. After he left the game, though, Quincy Patterson entered in relief and performed admirably — something he’s done before.

It wasn’t always pretty, but Virginia’s 38-20 victory over Duke on Saturday marked the sixth straight win for UVA in the series.

Saturday’s win also notes just the eighth time since the 2000 season that an ACC team has forced seven or more opponent turnovers in a game. Rare is it when you turn the ball over three times and still win the turnover margin with a +4. Ironically, the last ACC team to hit that benchmark was also Virginia — a 2014 win over Richmond.

Some UVa defensive highlights from yesterday:

The team finished with 11 tackles for loss, 7 forced turnovers and 5 sacks. That'll do.

Things got incredibly scary near the end of the Pitt-Louisville game on Saturday: Louisville quarterback Malik Cunningham suffered a serious injury when he was knocked down and appeared to hit his head on the turf. Cunningham was on the ground for 10 minutes while emergency personnel removed him from the field.

Update on Louisville QB Malik Cunningham. I’m told by the Cards he is moving everything and has feeling. Great news – as he had to exit game late 4Q via stretcher and was carted off.

Down 14 points late in the third quarter is probably not where Boston College expected to find itself on Saturday against Texas State. However, the Eagles managed to rally and win at home — scoring 17 unanswered points, including 10 points in the final 1:11.

Five straight completions early in the drive, followed by a big penalty on Texas State, and Hunter Long caps it with a 5-yard TD reception.

After a strong 2020 debut, Bailey Hockman earned the opportunity to start against Virginia Tech; however, things didn’t go so well for the NC State quarterback and the Wolfpack, as a whole. The southpaw completed just 7-of-16 passes (43.8 percent) and threw two interceptions. In relief, Devin Leary completed 75 percent of his passes (10.3 yards per attempt.

On the positive side of things, the backfield of Bam Knight and Ricky Person Jr. played well; the two backs combined for 175 yards from scrimmage on a combined 30 touches.

Syracuse shook off tough losses at UNC and Pitt with a 37-20 victory over Georgia Tech. Dino Babers’ club controlled the entire game: Syracuse grabbed a 17-point lead in the first quarter and won by that same margin.

All in all, it was a solid defensive performance from a unit that was without its best player: safety Andre Cisco.

No Andre Cisco today for Syracuse after an injury in warmups. It has been fun to watch the All-American safety thrive in the "rover" position of the 3-3-5, which has been solid through two weeks.

Something’s gotta give: this Friday, Wake Forest (0-2) plays host to Campbell (0-3). One of these two teams will get its first win of the season. The Demon Deacon enter as a huge favorite, unsurprisingly.

Jahmyr Gibbs, one of the top ACC rookies this season, continues to dazzle. Through the first two games of his career, Gibbs has produced 394 all-purpose yards (197 per game) and three total touchdowns.

From the outside looking in: the current state of the FSU football program feels incredibly precarious. That was already the case for Florida State even before the Seminoles took the field on Saturday — without head coach Mike Norvell.

Florida State committed 12 penalties (113 yards), while the defense allowed 517 yards, 33 first downs and 52 points in an embarrassing loss to Miami.

Saturday’s loss at Virginia is one Duke would prefer to expunge from the memory banks, quickly. A 10-0 lead to start the game evaporated as the Blue Devils turned the ball over seven times and lost 38-20.

Duke now has a -52 point differential on the season; things won’t get any easier next Saturday against Virginia Tech.