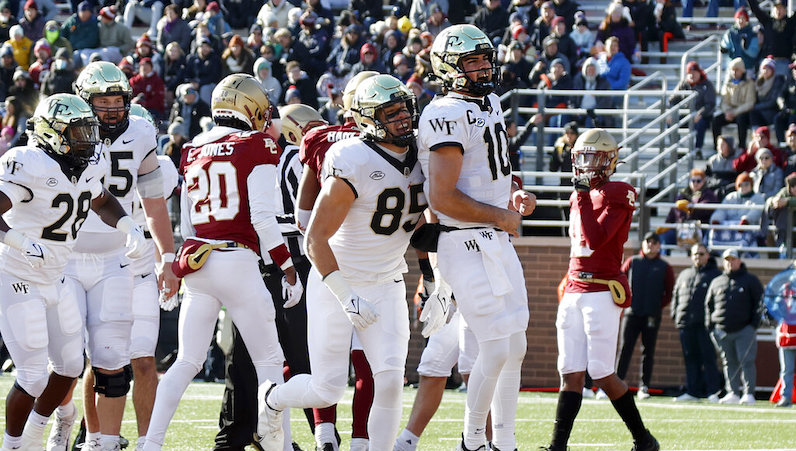 Sam Hartman is out indefinitely with a non-COVID related medical issue, according to a release from Wake Forest. Hartman, who was named Second Team All-ACC in 2021, is one of the top players in the country.

Following a workout on Tuesday, though, he sought medical attention for a non-football related concern. The results of ensuing tests and subsequent treatment will keep Hartman out of action for an indefinite period of time.

Wake Forest has yet to state what happened with Hartman. As of Wednesday (Aug. 10) morning, Hartman was at Wake Forest’s practice, although he was clearly not participating.

Wake Forest announces that Sam Hartman is out indefinitely with a non-COVID related medical issue.

He is at practice right now, not suited up. Was a full go Monday morning and Deacons didn't practice yesterday.

During the 2021 season, while Hartman led Wake Forest to an Atlantic Division title, the star quarterback threw for 4,228 yards and 39 touchdowns. Digging further: Hartman completed 58.9 percent of his pass attempts, while averaging 8.3 yards per attempt.

Hartman, the point man for one of the most explosive offenses in the FBS, also ran for 11 touchdowns. He joins Clemson’s Deshaun Watson as the only two ACC quarterbacks to post a season with 4,000 passing yards, 30+ passing touchdowns and 10+ rushing touchdowns.

By the advanced numbers, Hartman was one of the top passers in the country on throws of 20+ yards. Moreover, 70 percent of his passing yards occurred before the catch, which means Hartman numbers aren’t inflated by a bunch of catch-and-runs off short passes.

As a true freshman back in 2018, Hartman started nine games for the Demon Deacons. Hartman played in four games during the 2019 season, while serving as Jamie Newman’s backup. He took a redshirt that season.

During his four seasons with the Demon Deacons, Hartman has thrown for 9,266 yards and 72 touchdowns — to only 29 interceptions. Hartman also has 16 career rushing touchdowns.

Hartman in the releases this morning: “I look forward to attacking this rehabilitation process and I am so appreciative of the support I have received from my family, teammates and coaches.”