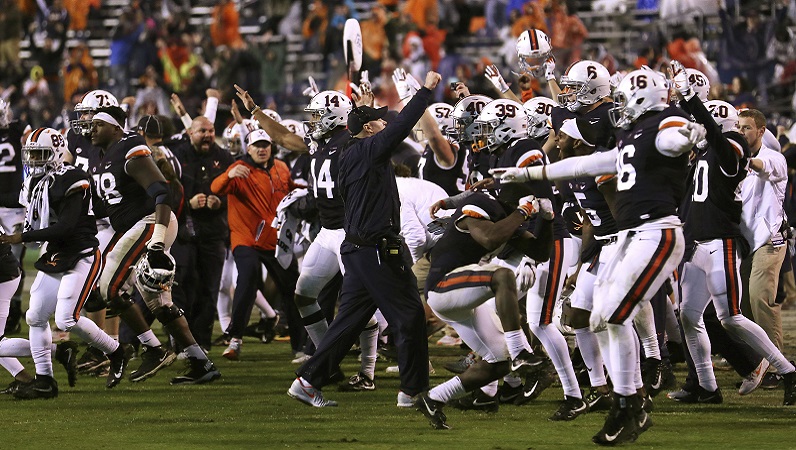 It’s hard to pinpoint Virginia’s turnaround, which sees the Cavaliers bowl eligible a week into November, to any one particular happenstance. But a change in fortune on the injury front since last year’s two-win campaign certainly seems to be playing a role.

Five key members of Virginia’s passing game have thus far avoided getting seriously hurt after all being held back by injuries to various degrees last season. That includes quarterback Kurt Benkert, who played with a bum shoulder much of 2016, and his four leading receivers. Senior wideouts Doni Dowling and Andre Levrone have each flashed potential since arriving on The Grounds, but have had underclassmen seasons repeatedly set back by injury. Junior speedster Olamide Zaccheaus played all last season, but similar to Benkert, Zaccheaus played a good chunk of last season nursing an injured hamstring. Tight end Evan Butts played last season, but told reporters on Monday he thought sitting out 2016 spring practice with an injury held him back in the fall.

Dowling and Levrone give the Cavaliers deep threats on the outside the program has been lacking much of the past decade, and so far they’ve combined for nearly 1,000 receiving yards and 11 touchdowns. Zaccheaus is Benkert’s favorite weapon, the junior has 66 catches for 683 yards and four scores, and even when he catches it in the flat he’s a threat to go all the way. Butts has developed into a key safety valve in shorter-yardage situations and is third on the team with 23 receptions.

Overall, having all four receivers at full strength has led to Benkert forcing fewer balls — he threw 11 interceptions in 11 games last year, compared to six through nine games this season. It’s also given the Cavs more confidence in late-game scenarios such as Saturday against Georgia Tech. The Yellow Jackets got a go-ahead score with 3:10 remaining, but Virginia needed less than two minutes to get down the field, where Benkert hit Levrone for a 27-yard game-winning touchdown.

It’s easy to understand the trust as Virginia has become a threat to score from nearly anywhere on the field. Levrone’s six touchdown receptions have been for an average of 43.7 yards while Benkert and Zaccheaus are the first Virginia players to hook up for more than one completion of 80 or more yards.

The Cavs found themselves in a shootout with Louisville last season, with Lamar Jackson leading the Cardinals on a game-winning drive in the final minute. If Virginia finds itself in a similar situation this weekend, you should see a Cavalier team comfortable with the setting.