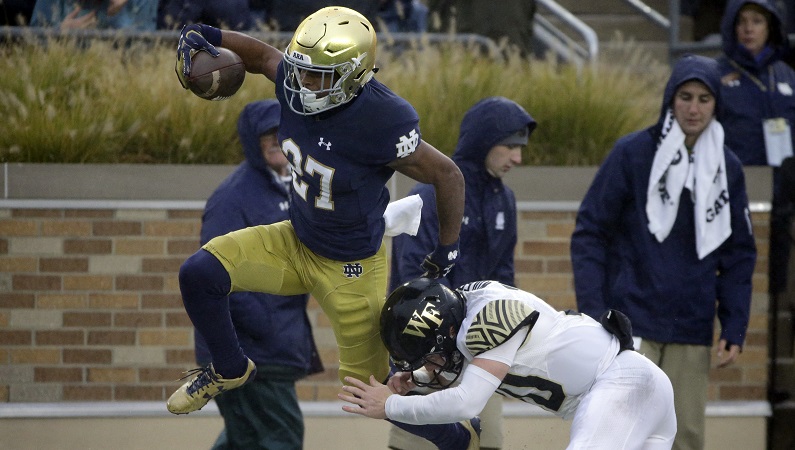 It wasn’t pretty on the defensive side of the ball. But Notre Dame did what it had to do in a 48-37 victory over Wake Forest in South Bend. The Demon Deacons lit up the scoreboard against former defensive coordinator Mike Elko and produced nearly 600 yards of total offense. But the Irish offense produced over 700 offensive yards and a whopping 380 rushing yards to keep the Irish’s chances of a College Football Playoff berth alive.

At 8-1 with three regular season games remaining, Notre Dame controls its own destiny as far as the playoffs. At No. 3 in the latest CFP rankings, all the Irish have to do is win out, and they’re in.

The winner of the impending Georgia-Alabama SEC Championship game will take one spot in the College Football Playoff. Oklahoma is poised to take the Big 12’s spot once again if they beat TCU on Saturday in Norman on Saturday night. If OU loses, however, it creates a free-for-all scenario. An OU loss could open up the door for Wisconsin, who remains unbeaten at 9-0.

Clemson will return to the College Football Playoff as the ACC’s representative if they win out.

That leaves Notre Dame to grab the other spot. But only if they can knock off Mark Richt’s Miami squad Saturday night in South Florida.

Miami is coming off a huge 28-10 victory over Virginia Tech that sets up an ACC Championship Game matchup with Clemson Dec. 2 at Bank of America Stadium in Charlotte. The only question is whether that prospective Miami-Clemson matchup will be a guaranteed CFP quarterfinal, as the Georgia-Alabama game will be.

If Notre Dame wins, the Canes are on the outside looking in. Miami would have just one loss, but will need to win out and probably get some help to sneak into the Playoff.

On the other hand, if Miami knocks off the Fighting Irish on its home field, the Canes are suddenly thrust into the forefront of the CFP equation. The Canes would also set up a dream scenario for the ACC – its league championshp guaranteeing the winner a berth in the Playoff.

So it’s pretty cut and dry for Brian Kelly’s club. Beat Miami, and it’s right there. All Notre Dame will need to do is beat Navy and Stanford in its final two regular season games, and wait for the CFP invite. Navy is 5-3 and coming off a recent loss to Temple, while Stanford is 6-3, also coming off a loss to Washington State.

It wasn’t too long ago that Kelly was firmly on the hot seat, coaching for his job. Some Irish supporters, in fact, may have called for his head following their 20-19 loss to Georgia in South Bend back on Sept. 9. But in hindsight, the UGA game now looks like a firm indicator that Notre Dame belongs in the conversation as one of the country’s top teams. If they can beat Miami, the Irish will be set up to prove it in the College Football Playoff.