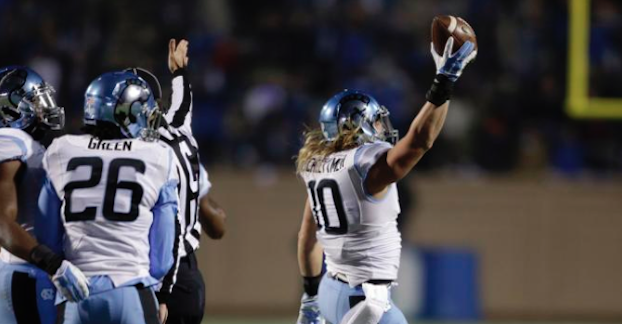 North Carolina’s defense has seen a lot of changes this offseason. Since the team wrapped up its 2014 campaign, the Tar Heels have experienced an entire staff overhaul on the defensive side of the ball, and new defensive coordinator Gene Chizik has implemented a 4-3 base formation.

Last week, head coach Larry Fedora talked about some of those changes during an interview with The David Glenn Show. Despite the new look, Fedora stated that one key player will continue to be the face of the defense.

“(Jeff) Schoettmer has stepped right into that role of leadership. He’s the guy,” Fedora said. “If you ask any of those players right now, they’ll tell you, he’s going to be the leader on the defense. He’s the quarterback on the field for the defense.”

As a junior middle linebacker last season, Schoettmer tallied 74 tackles and also picked off two passes, returning both for touchdowns.

“He’s probably the guy that feels most comfortable with everything we do,” Fedora said. “He learns it very quickly. He’s got great football IQ.”

During the conversation, Fedora also talked about the transition to a new defensive formation and discussed possible plans for the spring game in future years. Click below to hear the full interview: