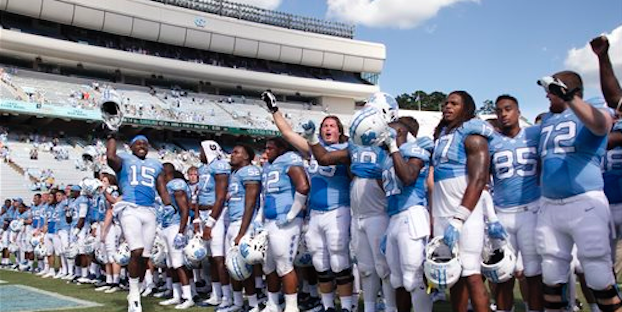 UNC landed one of the top in-state prospects in the 2017 class on Tuesday. (AP Photo)

Keeping the top football talent from leaving the state of North Carolina has often been a challenge for UNC since the Mack Brown era, but the Tar Heels are looking to prevent that from happening again in the 2017 recruiting cycle. On Tuesday, Larry Fedora’s staff took another step in the right direction by picking up a commitment from Waxhaw, North Carolina, standout J.T. Cauthen.

“It is truly an honor also a blessing to say that I will be attending the University of North Carolina,” Cauthen announced via his personal Twitter account.

A 6-2, 210-pound wide receiver, Cauthen is rated the No. 4 player in his state on the 247Sports Composite. He is the second top-five North Carolina prospect in the 2017 class to pledge to the Tar Heels, joining offensive lineman Jonah Melton (No. 2 in the state).

UNC and Clemson were the first two Power 5 schools to offer Cauthen before several other major college football programs joined the mix. While the Tigers emerged as the early favorite, the Heels gained ground over the last year before ultimately sealing a verbal commitment from the consensus 4-star wideout.

Cauthen is the third player in his class to pick UNC, joining Melton and McEachern, Georgia, receiver Tyler Smith.