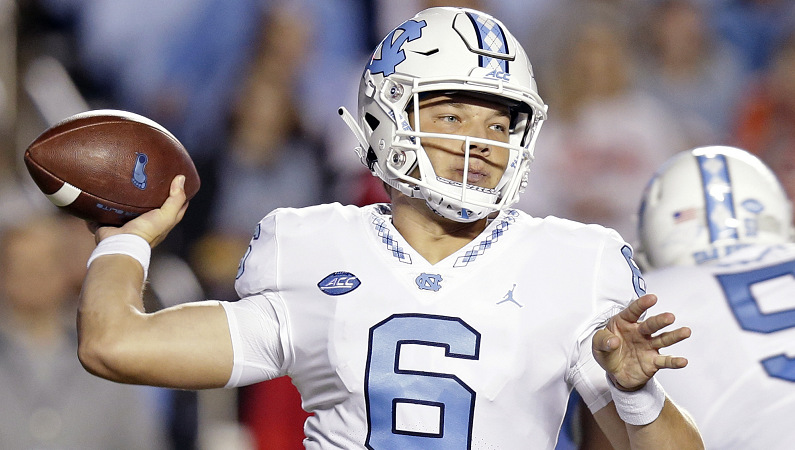 North Carolina appeared to find an offensive spark against Virginia Tech with the presence of true freshman quarterback Cade Fortin. Coming off the loss of Chazz Surratt for the season with a wrist injury suffered against Miami, UNC went with Fortin as the starter against the Hokies.

Fortin, who made his UNC debut in the loss at East Carolina, completed 10 of 18 passes in the first half against the Hokies.

UNC couldn’t seal the deal in the end zone, converting just one touchdown all night. But Fortin didn’t throw any interceptions – a significant upgrade from the error-prone Surratt and Nathan Elliott. He carefully directed UNC repeatedly into Hokie territory, and he was effective with his legs, rushing for 44 yards on six carries.

Just before halftime, as Fortin scrambled UNC back into scoring position, the freshman signal caller took a hard fall and injured his right leg. Fortin, who also suffered a season-ending leg/ankle injury during his senior season in high school, didn’t return in the second half. He wasn’t expected to play against Syracuse.

It’s officially unclear as to whether the true freshman might return at some point this fall. Predictably, Larry Fedora has refused to comment on Fortin’s status. He hasn’t even acknowledged publicly that Surratt is done for the year, despite numerous confirmed reports.

But multiple sources around the UNC program are suggesting Fortin has suffered a serious lower-extremity injury. A season-ending one.

The good news for Fortin is he can count the 2018 season as a redshirt year, due to the new NCAA rules. He’ll still have four years of eligibility with the Tar Heels starting in 2019.

The bad news, of course, is that UNC won’t have him available in the coming weeks.

Without Fortin, UNC will once again rely on Elliott, who has shown some signs of improvement recently despite continuing issues with his arm strength.

There are some positive statistical trends with Elliott in recent outings. After throwing four interceptions in a nightmare of a season opener against Cal, he hasn’t thrown an interception since.

While Elliott has been completing more passes, the main issue is that he is largely unable to stretch out defenses consistently. Of the 147 yards Elliott compiled against the Hokies, 80 of them were in a single completion to Carl Tucker. Elliott averaged just 6.7 yards per completion over his remaining 10 connections.

Considering UNC’s potential running the ball – the Tar Heels are seventh in the ACC with an average of 189.1 rushing yards per game – opposing defenses are going to stack the box against Elliott. Like Cal and East Carolina did. Without the benefit of a deep passing game that can find seams and require more back seven coverage, they will make the Tar Heels try to beat them in confined space,. Unless Elliott can find some magic, or the coaches can scheme something up, this will be an ongoing challenge.

Ruder on an option

UNC could also potentially turn to Jace Ruder, another true freshman who hasn’t played yet.

It was apparent throughout training camp that Fortin was ahead of Ruder in terms of development, and was more game-ready as a rookie. But given the loss of two scholarship quarterbacks, Ruder now finds himself UNC’s top backup.

If Elliott struggles, the Tar Heels have the option to play Ruder. But all signs indicate that despite his limitations, Elliott gives UNC its best chance of winning moving forward.