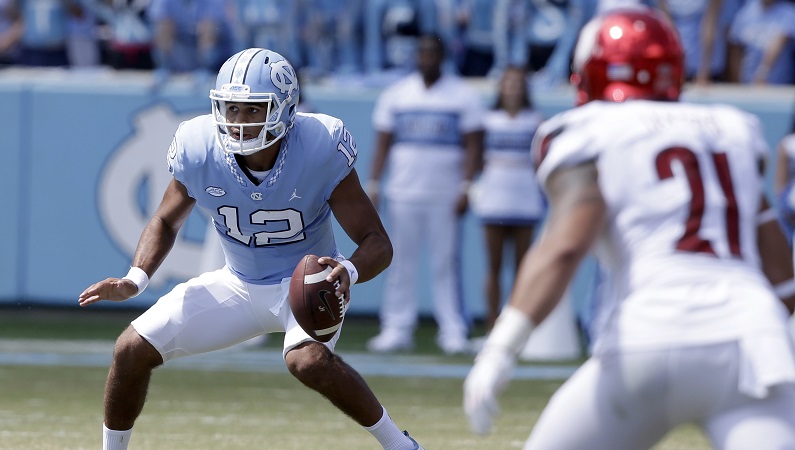 North Carolina’s quarterback situation got even more complicated near halftime of its 47-35 loss to Louisville. Starter Chazz Surratt made his first career start against the Cardinals and proved he belonged, completing 12 of 14 passes for 168 yards and two touchdowns. The numbers earned Surratt ACC Rookie of the Week honors.

Surratt took a weird hit to his back early in the game. He said afterwards that the situation him “got progressively worse” throughout the first half. Shortly after a 31-yard loss on a botched scramble in the second quarter, Suratt left the field and wouldn’t play again. He spent much of the second half riding on a stationary bicycle.

For at least a week, Brandon Harris brushed aside the critics suggesting that Surratt be handed the keys to UNC’s offense all by himself. Stepping in for Surratt, Harris was on the mark on 17 of 23 pass attempts for 216 yards and a touchdown. Harris’s 22-yard strike to Thomas Jackson late in the third quarter briefly gave UNC a 28-27 lead.

There’s no guarantee that playing only one quarterback will bring more success to the UNC offense. So despite the calls for Fedora to commit to either Harris or Surratt, the controversy isn’t going away anytime soon. Surratt’s injury may open the door for Harris to get more playing time. But Surratt, if healthy, won’t be benched. The situation may drive certain UNC fans crazy. But the Louisville game suggests the competition is bringing out the best in both Surratt and Harris.

Larry Fedora doesn’t provide injury updates beyond what the ACC requires – a weekly injury list. So aside of the individuals involved, very few people know exactly what’s going on with Surratt. His status for Saturday’s game at Old Dominion is very much a gametime decision.

Whether it’s simple soreness or a pulled muscle, or something much more significant, Surratt will not be at full strength against the Monarchs. Harris will most likely get the start, and will be in position to build on the solid performance he had against Louisville.

Fans have to worry about a potential long-term injury to Surratt – or at least one that hampers his play throughout the rest of this season. The fact that Surratt is a dual-threat quarterback, who won’t be the same player if limited only to passing, makes it even more important that the UNC coaches monitor his progress and avoid bringing him back prematurely. Another ill-timed shot to the lower back before he’s ready could be catastrophic.

The good news for UNC is that they do have a viable option if Surratt is out for any extended period of time. Though his performance against Cal left something to be desired, Harris’s outing against Louisville suggests that he’s getting a better feel for the UNC offense.

Old Dominion won’t present nearly the defensive challenge that Louisville did. It provides a chance for Harris to settle in even more heading into a pair of critical ACC Coastal Division matchups with Duke and Georgia Tech.

Read more: 3 players that can help UNC immediately on defense in 2018