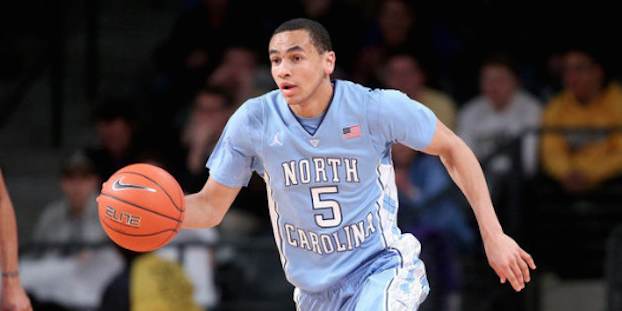 Marcus Paige has led North Carolina in scoring each of the last two seasons. (AP Photo)

University of North Carolina senior guard Marcus Paige fractured the third metacarpal on his right (non-shooting) hand in practice on Tuesday and is expected to be out of action for three to four weeks.

The senior from Marion, Iowa, has missed only one game in his first three seasons. He did not play against UAB his freshman season due to a strained left shoulder.

A two-time captain, Paige has averaged 13.2 points and has 474 assists at Carolina. He has connected on 225 three-point field goals and needs only nine to become UNC’s all-time three-point leader.

“I hate it for Marcus,” says head coach Roy Williams. “He’s such a wonderful young man – one of the most outstanding people I have been lucky to coach. I know he’ll handle this with the same level of maturity and responsibility that he does everything else.

“Our team will certainly be challenged in his absence. We will need everyone up and down the roster to step up their games and take care of each other and our team until he gets back.”

Carolina plays host to Guilford in an exhibition game on Friday at 7:30 p.m. and opens regular-season play against Temple in Annapolis, Md., in the Veterans Day Classic on November 13th.