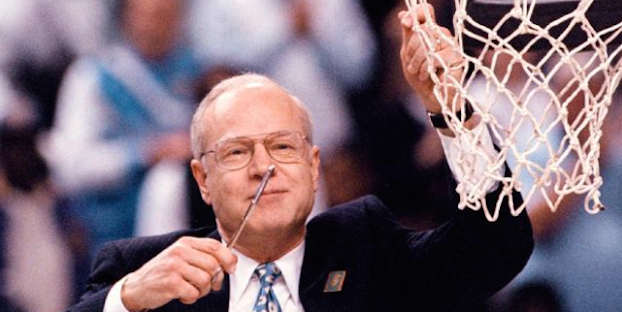 Former UNC head basketball coach Bill Guthridge passed away on Tuesday night at the age of 77, the school confirmed on Wednesday. Guthridge, who joined North Carolina’s staff as an assistant in 1967, took over as the Tar Heels’ head coach in 1997 before retiring after three seasons.

Guthridge’s passing comes just over three months after the death of Dean Smith, who Guthridge coached under for 30 seasons in Chapel Hill.

““It’s another tremendous loss for our University, our basketball program and our entire community,” Roy Williams said of Guthridge. “He was extremely special, important to every player, every coach who ever worked here. He was even more important to me.”

During his three seasons as a head coach, Guthridge led UNC to Final Fours in 1998 and 2000, receving National Coach of the Year honors in 1998. He compiled a record of 80-28 over those three years. His 34 wins in the 1997-98 season stand as an NCAA record for a first-year head coach.

“Bill Guthridge was a gentlemen coach, but a fierce competitor, and an incredibly loyal member of Dean Smith’s staff for three decades,” UNC director of athletics Bubba Cunningham said. “When it was his turn as head coach, he immediately won an ACC championship and took two teams to the Final Four. I learned very quickly when I came to Chapel Hill how beloved and respected he was by people all across this community. His loss is deeply felt by our university and the basketball world. Our condolences go out to his family and friends.”

Guthridge was inducted into the N.C. Sports Hall of Fame in 2013.