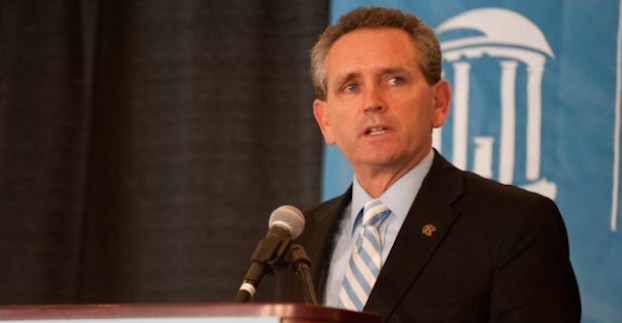 The school is a month away from its 90-day deadline to respond to the NCAA’s latest Notice of Allegations (NOA), which outlined five serious charges that include lack of institutional control. In an interview with The Associated Press, Cunningham said UNC will meet that deadline — there had previously been an eight-month hiccup in the process — in a case that hung over a strong 2015-16 sports season.

“I think we have positive momentum going,” Cunningham said. “I think we have more confidence. I think our campus community has healed and is continuing to heal. . I think there’s also some anxiety about what the future holds, but I don’t think it’s nearly as acute as it was 24 or 48 months ago.”

The case, an offshoot of a 2010 NCAA probe into the football program, centers on independent study-style courses offering GPA-boosting grades in the formerly named African and Afro-American Studies department. A 2014 review by former U.S. Justice Department official Kenneth Wainstein estimated more than 3,100 students were affected between 1993 and 2011, with athletes across numerous sports making up roughly half the enrollments.

The NCAA first sent an NOA outlining five potentially top-level charges in May 2015. UNC was near its response deadline in August when it reported additional information for review, pausing the process until the NCAA sent a revised NOA in April.

Cunningham said it’s still too early to say whether UNC will self-impose penalties in its response ahead of a hearing with an infractions committee panel in a case likely to last into 2017.

In the meantime, Cunningham cited high points that included two NCAA championships and a 3.0 GPA for athletes in the spring semester.

“I think it goes without saying that that’s all done with everybody’s eyes squarely fixed on what they’re taking, when they’re taking it, and the students have told us they’ve been under a microscope,” Cunningham said. “So hopefully the success will continue to build back confidence and trust. I think it has.”

UNC is set for another top-10 finish in the Directors’ Cup Division I standings, highlighted by the men’s and women’s lacrosse programs sweeping NCAA titles last month.

UNC’s highest-profile sports — men’s basketball and football — also had their best seasons in years. Men’s basketball won its first Atlantic Coast Conference Tournament title since 2008, reached its first Final Four since 2009 and lost to Villanova on a last-second shot in the title game.

“We had so many teams ranked highly all year,” Cunningham said. “Now we didn’t finish them all. But that’s probably as strong as we’ve ever been.”

Among the disappointments, the baseball program missed the NCAA Tournament for the second straight year — “I don’t have any concerns about the program,” Cunningham said — while Hall of Fame coach Sylvia Hatchell’s women’s basketball program struggled to a 14-18 record with a transfer-depleted roster amid the NCAA case.

As for facilities, UNC has approval for a $25 million indoor practice facility for football. The school is working on plans to move the outdoor track out of Fetzer Field and make Fetzer solely a lacrosse-soccer facility.

UNC is also spending around $4 million to renovate the men’s basketball locker room and reconfigure surrounding areas in the Smith Center.

“It’s been a challenging time; many of our coaches have talked about it,” Cunningham said of the academic case. “I think we’re really at the very back end of that now. So they have weathered the storm very, very well. To have that kind of performance, it’s really encouraging about our future, too.”