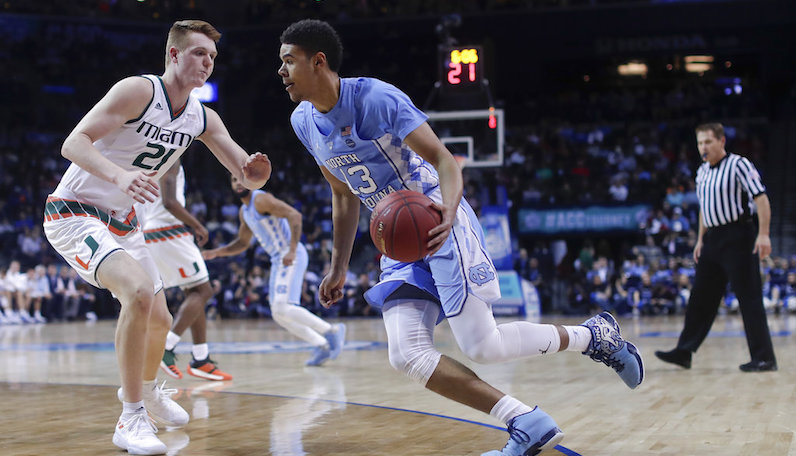 North Carolina guard Cameron Johnson (13) drives against Miami forward Sam Waardenburg (21) during the first half of an NCAA college basketball game in the Atlantic Coast Conference men's tournament Thursday, March 8, 2018, in New York. (AP Photo/Julie Jacobson)
North Carolina heads into the 2018-19 season in a unique dilemma. Although UNC basketball has considerable experienced talent returning, they will be without Joel Berry, their floor general the past three seasons.
The Tar Heels also lost the services of Jalek Felton to a mysterious series of occurrences, they’re not entirely devoid of point guard talent. UNC returns Seventh Woods, who missed approximately half of his sophomore season with an injury. The Tar Heels also welcome in freshmen Rechon Black and Coby White.
Woods played well early on last season, recording 12 assists against just five turnovers over UNC’s first seven games. He would miss Carolina’s next 17 contests, however, with a stress fracture in his right foot. Woods was largely ineffective after his return, recording eight assists against seven turnovers, and scoring just five combined points over UNC’s final 13 games.
Woods hasn’t yet proven he’s ready to step up and be a marquee point guard in the ACC. But as the elder statesman among UNC’s potential point guards, Roy Williams will provide him an opportunity in the fall to assume the role. But if Woods struggles to step up, White and Black will be well-positioned to step in. With their versatility as combo guards, White and Black provide Williams some additional lineup possibilities.

Meaty at the wings

UNC will be particularly deep around the perimeter, with seniors Kenny Williams, Luke Maye, and Cam Johnson, junior Brandon Robinson, and sophomore Andrew Platek all returning. In addition, the Tar Heels are adding 5-star wing Nassir Little, who will provide the team even more perimeter explosiveness and scoring potential along the wing.

With that group of talent in mind, UNC may step farther away in 2018-19 from its traditional “numbered” positioned lineup, with a true point guard (the “one”), a shooting guard (the “two”), a wing (the “three”), a power forward (the “four”), and a true center (the “five”).
Whether or not UNC goes to a more positionless lineup in 2018-19 will depend largely on the team’s returning sophomore big men. Rebounding will dictate whether or not the Tar Heels break from tradition.

Eye on the frontcourt

Garrison Brooks, Sterling Manley, and Brandon Huffman all experienced varying levels of growing pains this past winter. While all three showed flashes that they can play at a high level, none of them were consistent enough to assure their place in the starting lineup next season.
Luke Maye led UNC by a long shot in rebounding last season, with Theo Pinson surprisingly coming in second. Manley ranked fourth with 133 rebounds, while Brooks ranked seventh, with 128. Huffman played considerably less than Manley and Brooks, and finished with 41 boards.
If UNC’s young big men can show in preseason practice, and early-season games, that they can handle the workload on the glass, Williams will be more compelled to play a traditional lineup. But if Manley, Brooks, and Huffman aren’t rebounding, it will motivate Williams to get that production from somewhere.
Read more: UNC Basketball will make 2018 preseason trip to the Bahamas