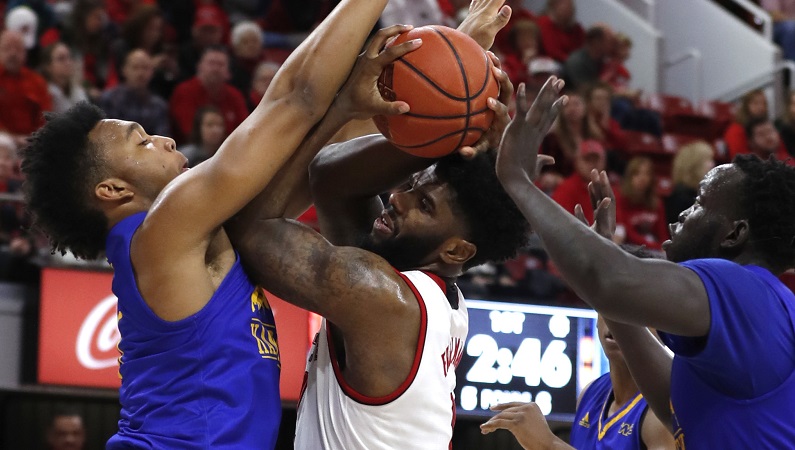 N.C. State's Lennard Freeman (1) looks for room as UMKC's Jordan Giles (5), left, and Aleer Leek (30) guard him during the first half of N.C. State's game against the University of Missouri-Kansas City at Reynolds Coliseum in Raleigh, N.C., Saturday, Dec. 9, 2017.

When head coach Kevin Keatts arrived at NC State, he promised that he would drastically improve the Pack’s conditioning. There has been no better example than fifth-year senior post player Lennard Freeman.

During his sophomore and junior years, a heavier Freeman labored through two seasons with a painful leg injury that required two different surgeries. He redshirted last year to give the leg a full chance to heal, and after Keatts arrived he transformed his body.

Now Freeman is averaging 12.5 points and 5.8 rebounds per game through the first 12 games of the season. He is also shooting an incredible 73.7 percent from the field and a drastically improved 74.5 percent from the line. Prior to this season, Freeman hovered around 50.0 on free throws for his career.

Freeman is not the lone big man shining. Sophomore center Omer Yurtseven has also had a nice jump and is averaging 11.8 points and 6.6 rebounds while shooting 65.2 percent from the field. Senior forward Abdul-Malik Abu is still returning to form after a preseason knee injury, but he is shooting 53.3 percent.

NC State’s frontcourt was expected to be a strength this season, although Abu’s injury may have set that back some. However, with three players shooting such a high percentage, Keatts may need to tinker his offensive attack some.

He has settled on freshman Braxton Beverly and senior post-grad transfer Allerik Freeman as his starting backcourt, but both are shooting poorly. Freeman is just 34.2 percent from the field and 25.4 percent on threes, while Beverly is 32.6 percent overall and 30.4 on threes.

In the stunning five-point loss to UNC Greensboro at home, Allerik Freeman and Beverly each took 13 shots while playing all 40 minutes of the game and made a combined 9 of 26 shots. The only bright spot was Beverly making 4 of his 9 three pointers.

Yet the trio of Abu, Lennard Freeman and Yurtseven went a combined 12 of 13 from the field and 7 of 10 at the line. NCSU may be better off going inside to an improved and conditioned frontcourt than relying on its inconsistent backcourt.

Read more: Inside The Playbook: No Drag, Omer Yurtseven is one of the top pick-and-roll finishers in America