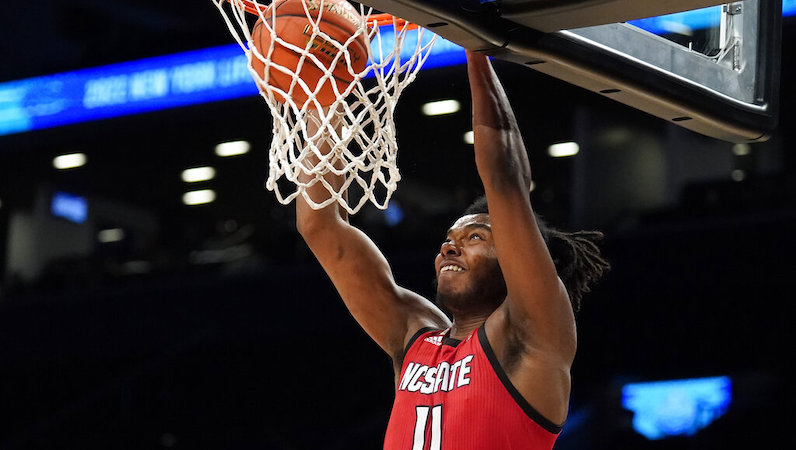 Gibson, who hails from Raleigh, appeared in 46 games during his career, including four starts this season. A lightly-used player, the 6-foot-9 center averaged 10.6 minutes, 2.0 points and 2.0 rebounds per game over two seasons.

Gibson spent most of his time as a backup with the Wolfpack. As a freshman, Gibson was a deep reserve behind Manny Bates and DJ Funderburk. With Bates injured this season, though, Gibson saw more playing time — working as one of the reserve centers, along with Ernest Ross, behind Ebenezer Dowuona.

In the back half of the season, Gibson had some good performances: a career-high 14 points in 37 minutes vs. Syracuse and 10 minutes at 23 minutes at Wake forest, both defeats. Gibson finished third on NC State’s roster with 15 dunks.

Prior to committing to NC State, Gibson — a 3-star prospect in the 2020 class — signed to play at Wake Forest for Danny Manning. When Manning was fired, Gibson was released from his NLI and flipped to NC State.

One could take this as a sign that Bates, a redshirt junior, could return for his fifth season of college basketball. That’s possible, although it seems unlikely for the talented-yet-often-injured big man.

Even if Bates decides to pursue professional opportunities, NC State still — for now — seems to have a lot coming back at the five position. Kevin Keatts plays with four guards/wings and one true big the majority of the time. Currently, the Pack project to have Ross and Dowuona back. Incoming 3-star center Shawn Phillips will enter the mix, too.

Why Dereon Seabron is the ACC’s Most Improved Player