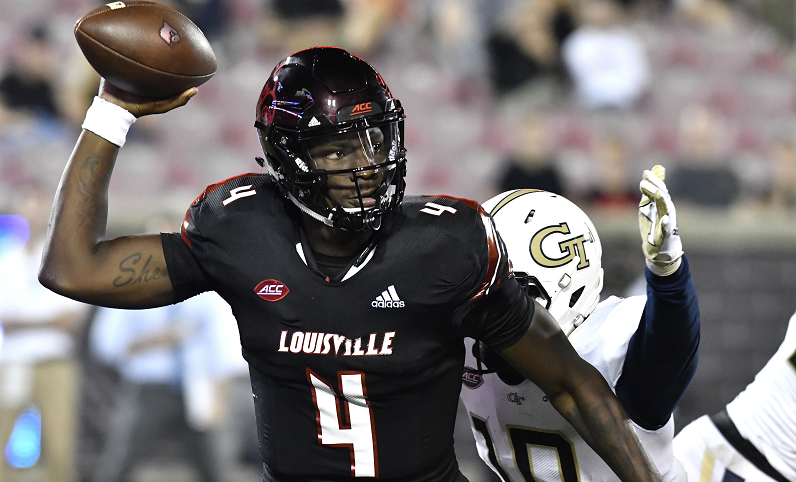 Louisville’s football program, which just two years ago was in the conversation for the College Football Playoff, is currently in the midst of a tailspin. Coming off an offensive letdown in a loss to Virginia, and after falling apart in the final minutes of a devastating home loss to Florida State, Louisville welcomed Georgia Tech to Papa John’s Cardinal Stadium Friday night.

The Cards were in a similar boat three seasons ago, as they got off to a 2-4 start back in 2015. But after head coach Bobby Petrino went with Lamar Jackson as the starting quarterback, Louisville reeled off six wins in its final seven games – setting the stage for 17 wins over the next two seasons.

This time around, Bobby Petrino doesn’t have a talent like Jackson to lean on.

Jackson’s early departure to the NFL left the quarterback job to Jawon Pass, who has struggled with turnovers early on. Pass had over 1,000 passing yards through six games. But he also had seven interceptions against just six touchdown passes. Pass is also struggling to gain yards on the ground, with negative rushing yardage through the first half of the season.

One of the biggest reasons for Jackson’s success at Louisville was his ability to keep opposing defenses off-balance with his legs. This year, opposing defenses – not having to respect Pass’s ability to spread them out with his rushing ability – are sitting back and challenging him to throw with zone schemes and rolling coverages, attempting to minimize the impact of Louisville’s top receiver Jaylen Smith.

After producing 980 receiving yards on 60 receptions a year ago – making him one of the top returning receiving threats in the ACC heading into this season – Smith has just 16 catches for 266 yards through Louisville’s first six outings. At that pace, Smith will produce barely half the yardage and catches he produced in 2017.

Through six games, Louisville ranked dead-last in the ACC in scoring offense, averaging just 20.5 points per game. The Cards are next-to-last in the league in rushing offense (118.8 yards per game). While U of L has six different rushers with at least 12 carries through the first half of the regular season, only one – backup quarterback Malik Cunningham – has over 200 rushing yards. And most of that was compiled in mop-up duty in blowout wins over Indiana State and Western Kentucky.

The Cards’ offense has also been one of the nation’s worst teams in terms of third and fourth down conversions. This was evident in Louisville’s first drive against Georgia Tech, when the Cards went for it on a fourth-and-short near midfield, and was unable to convert.

One potential solution for Louisville is giving more playing time to backup QBs such as Cunningham and Jordan Travis. The Cards actually did give Travis a shot late in the Georgia Tech game. But after a 25-yard run that helped move U of L into Yellow Jackets territory – which briefly energized a restless fanbase – Travis threw an interception that was returned 95 yards the other way for a touchdown by Georgia Tech’s Juanyeh Thomas.

There were some hints that the Cards might be facing a rebuilding year defensively in 2018. After losing numerous defensive standouts, U of L has just one senior – safety Dee Smith – in the starting lineup. Louisville is last in the ACC in sacks – just six through six games – and second-to-last in the league in rushing defense (231 yards per game).

The U of L defense has promise – seven of its current starters are either sophomores or freshmen. Multiple true freshmen, including linebacker Robert Hicks, defensive end Jarrett Jackson, and cornerback Chandler Jones, have seen immediate playing time. This unit will improve over the next couple of years. But it may not be enough to salvage the remainder of this season, given U of L’s upcoming schedule.

Things may not get much easier for the Cards in the coming weeks. They still have to play Atlantic Division rivals Clemson, NC State, Boston College, and Syracuse, who have gotten off to a combined 19-4 record to start the 2018 season. In-state rival Kentucky is ranked and off to a 5-1 start. Louisville’s only remaining game against a team without a winning record is against 3-3 Wake Forest.

Realistically, Louisville may have no other choice but to ride out the remainder of this season, and attempt to develop and grow its young players. The Cards won’t be expected to win many more games, which will take some of the pressure off their youthful personnel. They can go out and play, without worrying about things like national rankings or Atlantic Division positioning.

It’s not a recipe for a return to the postseason this season. But it could set the foundation for much better results in 2019 and 2020.