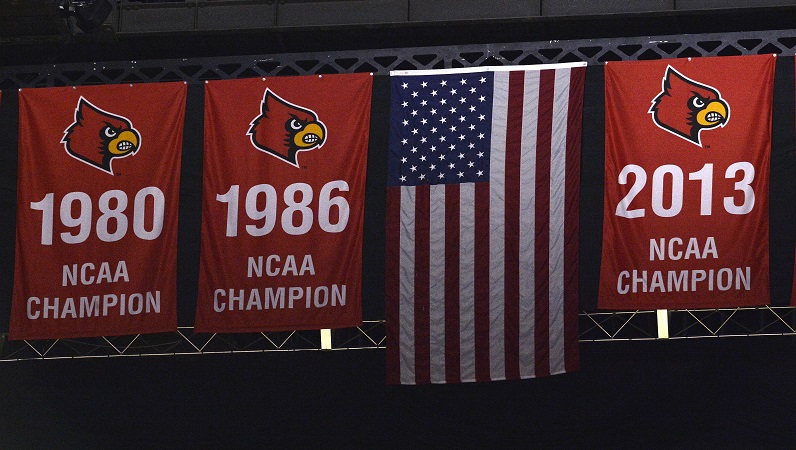 Three National Championship banners hang from the rafters at the KFC Yum! Center, the home of the University of Louisville men's basketball team, Saturday, Feb. 3, 2018, in Louisville, Ky. Louisville must vacate its 2013 men's basketball title following an NCAA appeals panel's decision to uphold sanctions against the men's program in the sex scandal case. The Cardinals will have to vacate 123 victories including the championship, and return some $600,000 in conference revenue from the 2012-15 NCAA Tournaments. (AP Photo/Timothy D. Easley)

The University of Louisville became the first men’s college basketball program to have a national title vacated after losing its appeal with the NCAA Appeals Committee.

The Cardinals will have to vacate 123 victories including the championship, and return some $600,000 in conference revenue from the 2012-15 NCAA Tournaments.

The NCAA penalties were handed down after an investigation that included allegations that a former Louisville staff member arranged for strippers to perform for players and recruits during parties at an on-campus dormitory from 2011 to 2015.

The Infraction Appeals Committee ruled the NCAA has the authority to take away championships for major rule violations. It also refuted Louisville’s position that the NCAA exceeded its boundaries and didn’t follow its own precedent established in other cases.

Today the NCAA Infractions Appeals Committee upheld earlier penalties imposed on the University of Louisville, including vacation of victories from 2011 to 2015. That includes the 2013 national championship and the 2012 Final Four appearance.

I cannot say this strongly enough: We believe the NCAA is simply wrong.

We disagree with the NCAA ruling for reasons we clearly stated in our appeal. And we made a strong case – based on NCAA precedent – that supported our argument.

From Day One, the university has admitted that the actions of the former operations director and any others involved under previous leadership were offensive and inexcusable. That is why we apologized immediately, cooperated fully with the NCAA, self-imposed penalties that were appropriate to the offenses and made significant changes to ensure incidents like this never happen again. Under the NCAA’s own rules, this cooperation should have been a factor in the severity of the punishment. Instead, it was ignored.

Like you, I believe the university needed to appeal the decision as strongly as possible. We brought in some of the best legal minds in the country, including the nation’s top litigator, who helped develop and argue our case. This effort was costly both financially and in the time commitment. We felt, and still feel, that the young men who earned those victories and the thousands of fans who supported them deserved our best effort. The pain caused for our fans and the players who were not involved is perhaps the most regretful result of this decision.

This dark cloud has hung over our heads for more than two years, and it has had a negative impact on our athletics program, our fans and the entire university family. While we disagree with the NCAA’s decision, it is time for the university to close this chapter and move forward with a stronger commitment to excellence on and off the court.

First and foremost, we are a university. However painful, this situation gives us the opportunity to turn the corner. We will move forward in an open, transparent and collaborative way. We will need your help to do so.

Read more: 3 favorites for ACC Coach of the Year race