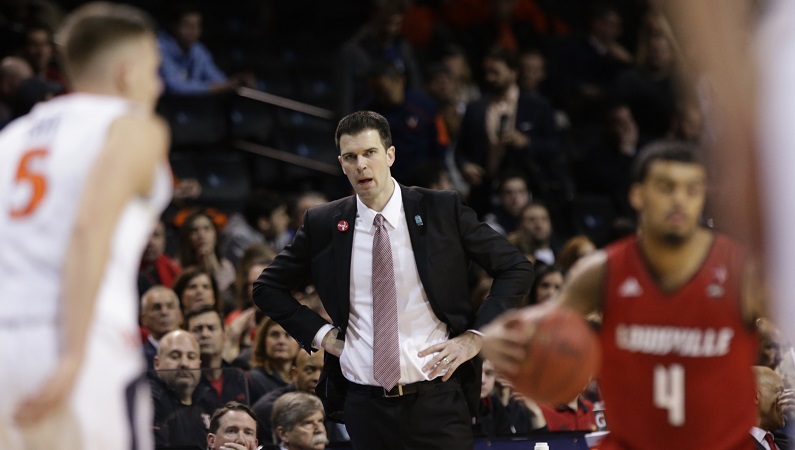 Louisville head coach David Padgett watches his team play during the first half of an NCAA college basketball game against Virginia in the quarterfinal round of the Atlantic Coast Conference tournament Thursday, March 8, 2018, in New York. (AP Photo/Frank Franklin II)

David Padgett, who has served as the University of Louisville’s interim head coach for the past six months, will not be retained as head coach moving forward with the Cardinals.

Padgett guided the Cardinals to a 22-14 record and the quarterfinals of the National Invitation Tournament as UofL finished in a tie for eighth in the ACC. Padgett’s 22 victories were the second-most for a first-year coach in Louisville history behind only Hall of Fame Coach Denny Crum’s 26-5 initial season in 1971-72.

“We all owe a great debt of gratitude to David for his leadership and poise this season,” said UofL Interim Director of Athletics Vince Tyra. “He took over during incredible circumstances, has handled himself respectfully throughout the season and I believe he has a bright future in coaching. We expect to determine a new head coach in a short period to build upon the great basketball tradition of this university.”

Padgett became the Cardinals’ coach on Sept. 29 just three days prior to the start of practice and it was three weeks before his staff was complete. UofL earned 20 wins for the 16th straight season, one of just four schools in the nation with that consecutive streak. The Cardinals played the nation’s 10th toughest schedule according to the Ratings Percentage Index and played 23 games – nearly two-thirds of its games — against teams that advanced to postseason play, posting a 10-14 record in those games.

Padgett, 33, was the third-youngest head coach in NCAA Division I this season and the youngest among Power 5 schools. With UofL’s win at Florida State on Jan. 10, Padgett became only the second UofL coach to win a road game over a Top 25 ranked opponent in his first season, a feat also accomplished by John Dromo in 1967. Louisville’s win at No. 23 Florida State was its first road victory over a Top 25 opponent since 2014.

Before he became the Cardinals’ head coach, Padgett was UofL’s director of basketball operations for two seasons (2014-16) before his move to an assistant coaching position in 2016.

In his three seasons on the UofL staff before becoming Louisville’s interim leader, the Cardinals produced a collective 75-26 record (.743), finished among the top four teams in the ACC in each year, and UofL reached the NCAA Elite Eight in 2015. Last year, UofL posted a 25-9 record, tied for second in the ACC and earned a No. 10 ranking in the final Associated Press poll. He helped the Cardinals assemble a top ten recruiting class in 2017, as UofL’s class was ranked seventh in the nation by ESPN and Rivals and 247Sports, while the Cardinals were 10th by Scout.com.

Before joining the UofL staff, Padgett spent three years as an assistant coach at IUPUI from 2011-14. He served a year as assistant strength coach with the Cardinals as UofL posted a 25-10 mark, beat seven ranked teams and reached the title game of the Big East Championship.

Padgett played professional basketball for UB LaPalma in the Canary Islands for two years following his graduation from UofL. He had reached the final preseason cut of the Miami Heat before his playing career in Spain.

A three-year starter and captain at center for the Cardinals (2005-08), Padgett was a unanimous first-team All-Big East Conference selection as a senior and also earned USBWA All-District IV honors. He averaged a team-leading 11.2 points and grabbed 4.8 rebounds his senior year in 2007-08 when UofL reached the NCAA Elite Eight.

A McDonald’s All-American in high school in Reno, Nev., Padgett played his freshman collegiate season at Kansas before transferring to Louisville. Padgett’s basketball bloodlines run deep as his father played at the University of Nevada and his uncle played at New Mexico. His grandfather Jim played for Oregon State and his sister played for the University of San Diego.

Read more: Who will be the next head coach at Louisville?