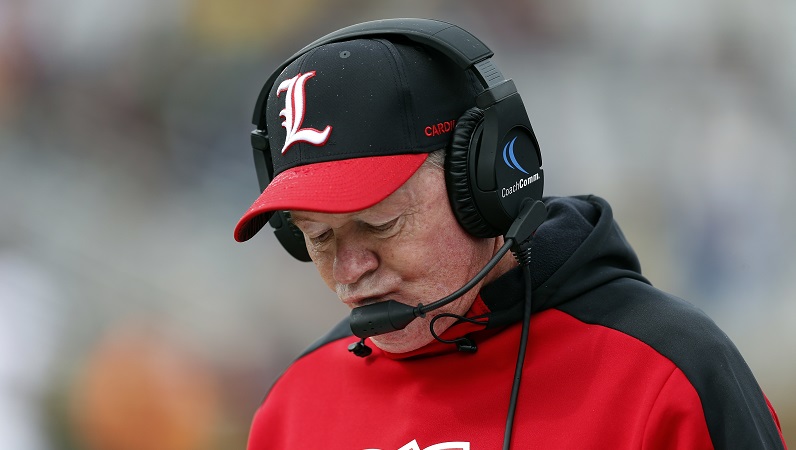 Louisville pulled the trigger and fired head coach Bobby Petrino following a 54-23 loss to Syracuse over the weekend. Petrino skyrocketed up Hot Seat boards around the country this fall as the Cardinals are struggling through their first losing season since 2009.

The Cards are mired in a 2-8 season – a freefall considering just two years ago they were in the College Football Playoff hunt at midseason, and featured the Heisman Trophy winner in Lamar Jackson.

This years U of L defense is one of the worst in school history. U of L’s defense currently ranks dead last in the ACC in points allowed (42.1 ppg), touchdowns allowed (56), rushing yardage allowed (2,823), rushing touchdowns (32), and average yards per pass completion (8.3).

Over the course of the season, the Cards allowed 77 points to Clemson, 66 points to Georgia Tech, 56 points to Wake Forest, and most recently 54 points to Syracuse. The Cards opened the season by allowing 51 points to top-ranked Alabama.

Although Petrino has been a consistent winner throughout his various coaching stops, the Cards are willing to eat Petrino’s $14.1 million buyout and move forward because they feel the top option is not far away – Purdue head coach Jeff Brohm.

Brohm is 47 years old – a solid age in terms of experience and youth. He’s a Louisville native who starred at quarterback for the Cards in the early 1990s. He is plugged in to the city and has connections throughout the states of Kentucky and Indiana, which would aid Louisville in recruiting.

The Cards should get whoever they want at Brohm’s alma mater – Louisville’s Trinity High School – moving forward if they’re able to bring him back. They would also stand a much better chance recruiting throughout the Midwest. Brohm has proven himself as a successful recruiter at Purdue, moving the Boilermakers into the top 25 of the 2019 247Sports Composite team recruiting rankings.

Brohm has cut his teeth as a head coach at Western Kentucky and Purdue, producing a 42-21 overall record through his first 63 games. He led Western Kentucky to back-to-back 10-win seasons in 2015 and 2016, including a 12-2 finish in 2015 and a perfect 8-0 mark in Conference USA play.

Brohm is 3-0 in bowl games, including a victory over Arizona in the Foster Farms Bowl, which gave Purdue a 7-6 record. The Boilermakers got off to a 5-5 start this season, poised to reach a bowl game for the second straight year if they can beat either Wisconsin or Indiana to close out the regular season.

The Cards are prepared to pay top 20 money for Brohm – over $4 million per season. Brohm currently makes $3.8 million annually at Purdue, so U of L will have to break the $4 million barrier to entice him. They would also have to pay anywhere from $3 to $4 million to Purdue to break Brohm’s contract with the Boilers, along with Petrino’s hefty buyout.

But it’s a financial commitment the Cards have to be willing to make to bring home a potential savior.

Read more: Chris Mack on Rick Pitino: “He’s been nothing but gracious and kind with his advice. He thinks Louisville is a great place”