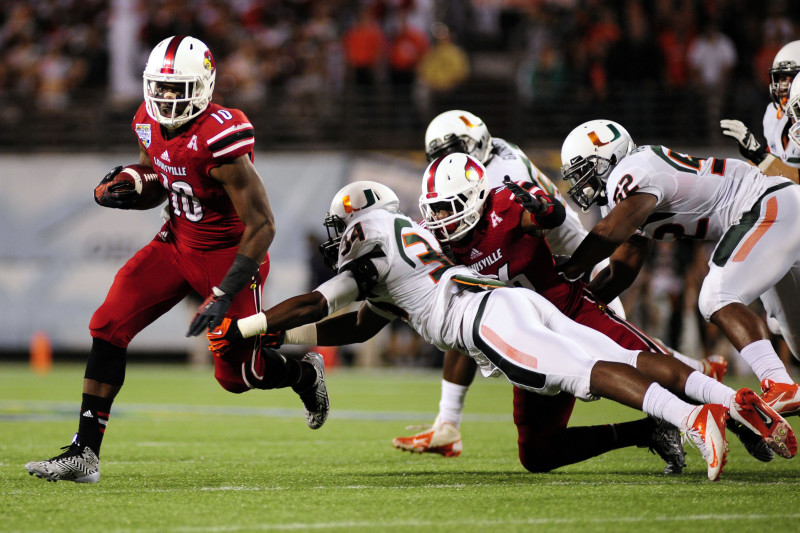 ORLANDO, Fla. (AP) – Miami spent the last two bowl seasons watching from home, waiting for the day when it could begin trying to climb back to prominence.

After being pounded in the Russell Athletic Bowl by future Atlantic Coast Conference foe Louisville, it’s clear that rebuilding process is not yet complete.

Teddy Bridgewater threw three touchdown passes and ran for another score to help No. 18 Louisville rout the Hurricanes 36-9 on Saturday night.

Miami coach Al Golden said despite the setback, the Hurricanes aren’t going to stray too far from the foundation they’ve been trying to build.

Miami, playing in its first bowl game since 2010, hasn’t had a bowl victory since 2006, losing four straight. The Hurricanes were returning to the postseason following a two-year, self-imposed ban during an NCAA investigation.

They got on the scoreboard first with the safety. But it was one of their few highlights.

The Hurricanes also were held under 10 points in a bowl game for the first time since the 2005 Peach Bowl, a 40-3 loss to LSU.

“Obviously, it wasn’t the performance I wanted to have being my last game, but I give credit to Louisville,” said quarterback Stephen Morris, who was 12 for 27 for 160 yards. “They had a great defensive plan going. They were in the right spots at the right time.”

With Cardinals’ fans chanting “Teddy! Teddy!” at times throughout the game, Bridgewater, projected to be a top NFL draft pick if he comes out this summer, set a school season record with 31 touchdown passes. The Miami native also tied the school record with his 27th victory as Louisville’s starter.

“It meant a lot because not only because I and so many other guys going against our hometown school, but we were going against a quality opponent,” he said. “That’s what we’ve been waiting for all year…That’s why you play the game, to compete.”

On the stage during the postgame trophy presentation Bridgewater, the game’s MVP, was showered again by Louisville fans who beckoned him with “One more year!” overtures.

Louisville coach Charlie Strong said throughout the week that he was banking on his defense to help spark the Cardinals’ offense. It responded with one of its best efforts of the season.

The Cardinals settled for field goals early after struggling to convert on third downs inside Hurricanes’ territory. That coincided with one of Bridgewater’s top third-down targets – receiver DeVante Parker – going down on the Louisville’s second series of the night with an ankle injury.

But those fortunes changed quickly when Parker returned in the second quarter after getting his ankle attended to by the training staff.

He immediately caught three passes on a seven-play, 80-yard drive, including a capping 26-yard touchdown reception. Parker finished with nine catches for 142 yards.

Miami‘s next possession appeared to have stalled near midfield, but an unsportsmanlike conduct penalty kept it going and eventually set up the Hurricanes with second-and-goal on the 5.

Morris dropped back to pass, but was grabbed and lost the ball as he was slung to the ground by Cardinals defensive end Marcus Smith. The loose ball was then recovered by Louisville’s Brandon Dunn to end the threat.

Louisville got it again with just under 2 minutes to play and drove 60 yards for another touchdown, scoring on Bridgewater’s 12-yard pass to Michael Harris.

“I just think overall, I think it’s really important that every coach, every unit, every player, everybody is evaluated and I’ll start that probably tomorrow.”