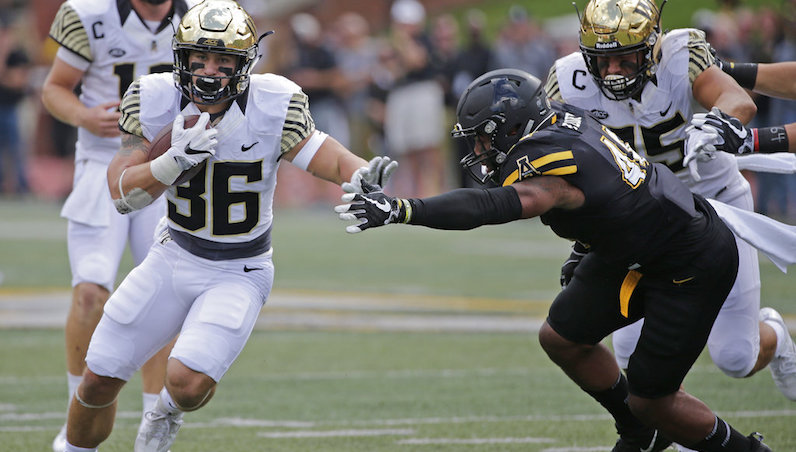 Going into this Wake Forest football season, the positional debate on offense appeared to be which quarterback would see the most action, John Wolford or Kendall Hinton.

After four games, though, Wolford has clearly been the No. 1 signal-caller. Instead, it’s been the running backs who have been fighting for playing time.

While the scores of the Deacons’ early games have shuffled some of the carries, it’s clear that there’s been some shifting already.

Who is in the mix?

In Wake Forest football’s first two games, Cade Carney led the way with 23 runs, followed by 16 for Matt Colburn and 10 for Arkeem Byrd. But Carney, the starter, only gained 79 yards on those runs. The staff wasn’t sure what to do behind him. Byrd got most of the carries in the opener (along with Isaiah Robinson in the blowout), then Colburn got them in the second game.

In the second two games, Byrd led the way with 28 carries, Colburn had 20 and Carney had 13.

Carney carried early against Utah State, but he fumbled late in the first half. After Carney carried on the next play, Dave Clawson turned to Byrd and Colburn for the rest of the game.

Against Appalachian State, Carney carried five times for 24 yards on the opening drive. He carried twice for no yards later in the half, but that was it. Carney’s ribs were banged up, so it’s difficult to know how much was injury related and how much was a coaching decision.

On one hand, having three backs who bring a little bit different skill set can be an advantage. Carney is the pounder, and Byrd the speedster. Colburn is somewhere in between. But Clawson knows it also can be a problem.

“It’s hard to keep three backs going,” he told the media after the Utah State game, “but we want to keep them all going because we know we’re going to need all three of them.”

Since Byrd arrived, Clawson has been crowing about how special he can be when he’s healthy. The Deacons are just starting to see that. However, while Byrd is the only one of the three backs with big-play ability, it can be difficult to play him in situations where the offensive line isn’t opening holes — and that’s still more often than not.

So as long as all three remain healthy, the pressure will be on Clawson and the Wake Forest football staff to figure out how to play the right hand at the right time.

All the skills: Greg Dorch quickly turned into 1 of the ACC’s top athletes