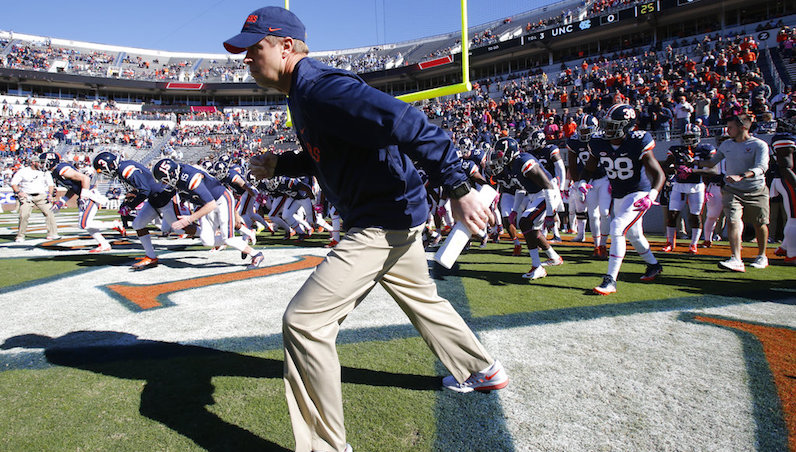 Virginia football coach Bronco Mendenhall leads his team onto the field for a game against North Carolina in Charlottesville, Va. (AP Photo)

A week before the season started, Bronco Mendenhall said we could expect to see plenty of true freshmen on the field for his Virginia Cavaliers this fall. That’s a promise that’s held up with 11 first-year Cavs taking the field in UVA’s first two games.

That number doesn’t include backup quarterback Lindell Stone or offensive lineman Tyler Fannin. Neither took the field in Virginia’s first two games, but the coaching staff has stated they don’t intend to redshirt either one.

Mendenhall’s decision to burn several redshirts and dip heavily into the true freshmen pool isn’t surprising. The Cavs have a serious lack of depth in several spots, and this year’s new players are guys the staff brought in specifically to fill some of those holes and fit its system.

The second-year Virginia coach also revealed this preseason that his philosophy on freshmen has evolved a bit since arriving at UVA, partially because the the university’s mission is to keep students on track to earn a degree in four years.

But it’s not like Mendenhall shied away from putting talented freshmen on the field during his tenure at BYU, either.

The Cougars played an average of 12 true freshmen a year over the course of Mendenhall’s final three seasons at BYU, including 16 in his last year there. That included some true standouts, such as quarterbacks Taysom Hill and Jake Heaps, who broke nearly every freshman passing record at the school, and All-American offensive lineman Tejan Koroma.

Torching red shirts is simply a fact of life for where the Virginia program is right now. But coming off a disappointing home loss to Indiana, if the Cavaliers are going to make serious improvements over last year’s 2-10 record, it’s going to need to see more production from the youngsters who get on the field.

So far, kicker A.J. Mejia is easily the most productive first-year Mendenhall has used. The Fairfax, Va. product has made all six extra point attempts, but has attempted only two field goals, nailing a 22-yarder, but missing from 42.

How about the others?

But, statistically at least, most of the rest of the class has done very little. Six defensive players have gotten on the field — lineman Mandy Alonzo, safety Joey Blount, cornerback Germane Crowell and linebackers Matt Gahm and Zane Zandier — but Blount is the only one to make a tackle so far.

Offensively, wideout Terrell Jana and running backs Lamont Atkins, PK Kier and Jamari Peacock all show up on the participation charts. But Jana’s single catch for 12 yards is the only tangible offensive production from the group.

That’s not to say the freshmen haven’t contributed in less obvious ways, but with UVA’s struggles on both sides of the ball, Mendenhall and Co. need to find some playmakers. There may very well be some in this group of recent enrollees. It’s early and more experience could soon pay off. But so far, the results have been underwhelming.

Which guards are at the top of the UVA basketball recruiting board?