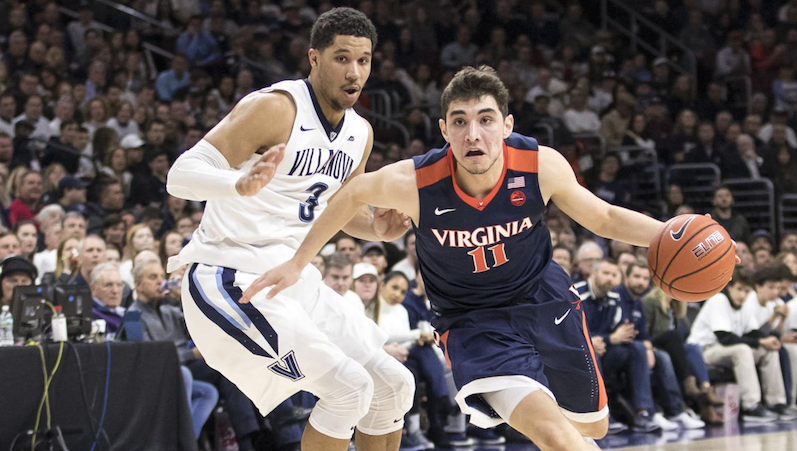 Ty Jerome, right, of Virginia basketball drives to the basket against Villanova's Josh Hart, left, during the second half on Sunday, Jan. 29, 2017, in Philadelphia. (AP Photo)

The nature of college basketball makes it so one night in March can change everything.

Virginia and Villanova were neck-and-neck through the regular season, easily establishing themselves as the nation’s two best teams by February. Then the Cavaliers suffered one of the most shocking losses in the history of sports, falling to 16-seed UMBC in the first round of the NCAA Tournament.

The Wildcats went on to win a second national title in three years, making Jay Wright’s program the standard in college basketball; on the flip side, fans and pundits question why Tony Bennett has been to just one elite eight in 12 years as a head coach.

Villanova’s recent success makes it possible to forget Wright, not that long ago, was in Bennett’s position: the coach with consistently great regular seasons who couldn’t win it all. In fact, before winning his first NCAA title in 2016, Wright went six consecutive seasons failing to even advance to the Sweet 16.

What changed for Wright and Nova, it’s hard to say exactly. He certainly made some tweaks. Wright popularized the four-guard lineup, and followed the analytics that suggested value of shooting three-pointers in high volume.

But it’s also true the single-elimination NCAA Tournament often hinges on luck and timing; however, good coaches who consistently put together winning teams tend to break through eventually. Still, the rest of the college basketball world is going to look at what Villanova’s done, and work to replicate it. That might be especially true at Virginia, where the programs have more than a few similarities.

(Note: the two teams played one another in back-to-back seasons — with Villanova winning in the last matchup, back in 2017 — Ty Jerome’s breakout game.)

For as much talk as there is about UVA’s system limiting it in recruiting, it’s certainly worth noting, according to 247Sports, Villanova hasn’t had a top-10 recruiting class since 2009 and there’s often significant overlap between the players offered scholarships at each school. While the Cavs may have lost top recruit Jahvon Quinerly to the Cats, Philadelphia native De’Andre Hunter spurned a Villanova offer to go to Virginia.

Villanova’s success suggests Virginia has good enough players to win it all, but prompts the question of what Bennett could do differently.

You could bet everything Virginia won’t get away from it Pack Line defense as long as Bennett is in charge, but while patience on offense was still a hallmark of Cavaliers basketball this season, the coach did allow his players a little more freedom with the ball.

Might the success of Villanova, and the Houston Rockets at the NBA level, convince Bennett to let his team speed up even more on offense, particularly in looking for 3-point shots? Considering the personnel UVA is expected to have next season, it would make some sense.

Virginia shot 38.3 percent on 645 three-point attempts last season; Villanova shot 40 percent on 1,158 attempts behind the arc. The Cavaliers wouldn’t have to go to that extreme, but suppose UVA continued to shoot 38 percent on 200 additional attempts. That would have been nearly seven more points per game — give or take.

Outside of Jack Salt, who will rarely take a shot outside the lane, Virginia’s two worst three-point shooters who played significant minutes last year were Isaiah Wilkins (3-for-17) and Nigel Johnson (16-for-49). Both are gone, and the 2018-19 rotation could have even more shooters.

The deep range of Kyle Guy and Ty Jerome is well known, and while Hunter shot just 38 percent from deep as a redshirt freshman, he was better than 47 percent on 3-pointers in conference play. Francesco Badocchi and/or Jay Huff will likely get a lot of Wilkins minutes at the four and both are better three-point shooters.

And it’s not like it would necessarily go against Bennett’s nature to let it fly from deep. He’s still the NCAA’s all-time leader in three-point percentage after shooting better than 49 percent at Wisconsin Green Bay, where he attempted more than six threes per game as a senior.

Game Recognize Game! The ole’ ball coach still has it! #What💪 #GoHoos pic.twitter.com/KRzCcZYrO5

Considering the makeup of the roster, it would make a lot of sense to mimic Villanova, or perhaps even more so the Rockets (Hunter has so many similarities to Luc Mbah a Moute, but is a better scorer).

The loss to UMBC shouldn’t, and won’t, lead UVA to abandon the philosophies that vaulted it to the top of the ACC. But don’t be surprised to see some 3-pointers launched earlier in the shot clock from time to time.