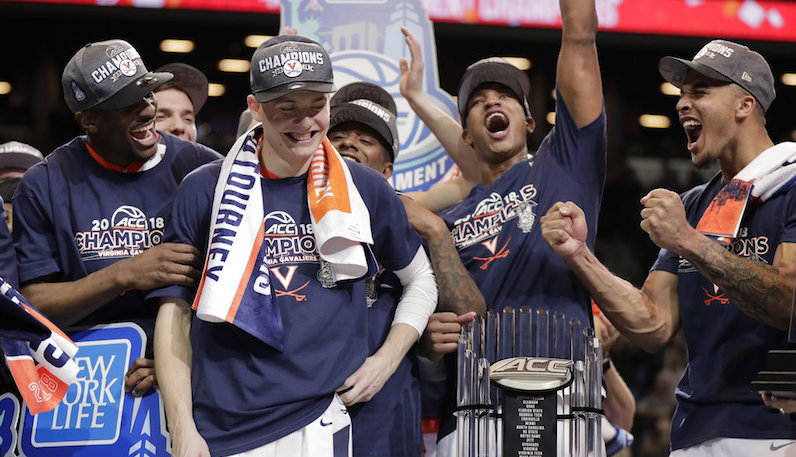 The opening weekend of the NCAA Tournament has been a mixed bag for Virginia head coach Tony Bennett.

The No. 1-seed Cavaliers will be heavy favorites to win two games in Charlotte, and advance to at least the Sweet 16. But while Bennett has taken UVA to five of the past six NCAA Tournaments, the Cavs have played on the second weekend just twice.

The good news for Wahoo fans is that each of Bennett’s previous two No. 1 seeded-teams has gone to at least the Sweet 16. Another positive trend? The 2016 Cavs went a step further than the 2014 version, getting to the Elite Eight, but blowing a second half lead to Syracuse. If the pattern holds up, this Virginia team would make the school’s first Final Four since 1984.

But even in those seasons, the first weekend could present some challenges. In 2014, the Joe Harris-led Cavs struggled with 16-seed Coastal Carolina in the first round before pulling away late for a 70-59 victory. That Virginia squad turned around and blew out Memphis 78-60, before a heartbreaking Sweet 16 loss to Michigan State.

The Cavs had an easier time two years later when Malcolm Brogdon paced the top-seeded team in an 81-45 hammering of Hampton. Two days later, Virginia scored a 77-69 victory against Butler that was more hard fought than the final score indicated.

While those teams are certainly most comparable to the current Virginia bunch, and the Cavs should handle UMBC with ease, a second round game against either Kansas State or a Marcus Foster-led Creighton team could present a challenge.

Interestingly, in what are often considered “poor” tournament showings for Bennett’s Cavs, Virginia has mostly gone about as far as should be expected. In his first NCAA Tournament at UVA in 2012, the 10th-seeded Cavaliers lost in the second round to No. 7 Florida.

The 2015 tournament had to be the biggest disappointment, with No. 2-seed UVA falling to seventh-seeded Michigan State. Of course, that was a Michigan State team originally considered a national championship favorite, whose seed dropped significantly while battling the injuries. The Spartans, following a six-point victory against Virginia, made it to the Final Four.

Last year, the fifth-seeded Cavs lost to No. 4 Florida in the second round after getting by a tough UNC Wilmington team in the opening round.

It’s those losses to Florida, combined with the 2016 Elite Eight collapse, that contributed largely to Bennett’s reputation as a someone who struggles in March. Though the Gators were favorites in each matchup, Florida enjoyed shockingly drastic margin of victory, winning by 26 points each time.

This is, of course, a new team with different elements that could lead to NCAA success. Ty Jerome is clutch. De’Andre Hunter has developed a cool confidence to match his athleticism. Mamadi DIakite brings an edge last year’s Cavs lacked.

But the opening weekend can be both tricky and scary for high seeds. Every perennial powerhouse has had years it didn’t escape the first weekend, and that’s a fate the Cavaliers hope to avoid as the program desperately looks to take the next step.