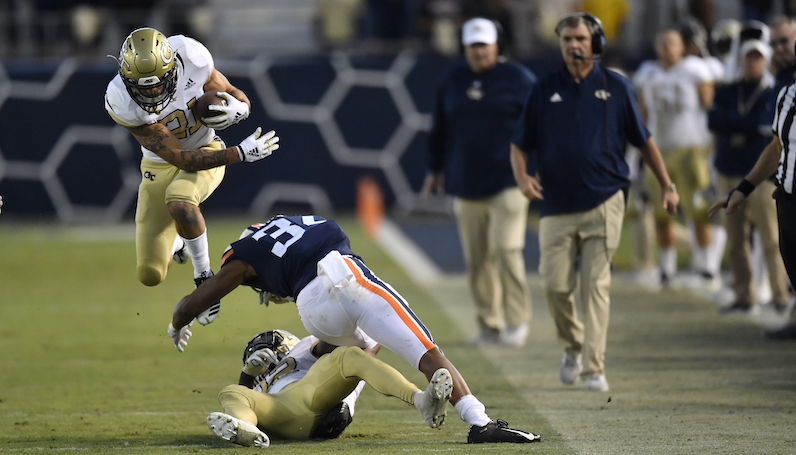 Georgia Tech defensive back Zamari Walton (21) runs against Virginia defensive back Darrius Bratton (32) during the second half of an NCAA football game, Saturday, Nov. 17, 2018, in Atlanta. (AP Photo/Mike Stewart)

In terms of S&P-plus, Virginia projects as a top-25 defense this season. Bronco Mendenhall and the Cavaliers have a lot of talent on that side of the ball; however, Unfortunately for the Cavaliers, the team’s defense took a hit this week. Darrius Bratton suffered a knee injury at Wednesday’s practice; he will likely miss the entire 2019 season, according to Doug Doughty of the Roanoke Times.

Bratton, who was already dealing with a hamstring injury, was projected to start at cornerback — opposite of Bryce Hall, the team’s best player.

Sorry to hear that #UVa defensive back Darrius Bratton from Roanoke suffered knee injury Wednesday and is likely lost for the season. Good kid. Hasn't been redshirted so has two years remaining.

As a sophomore in 2018, Bratton played in 13 games (five starts) and recorded 16 total tackles — to go along with breaking up seven passes. Bratton could, as Doughty notes, redshirt this season as he recovers from his injury, and then get back on the field in 2020 with two more years of eligibility.

Even with the departure of star safety Juan Thornhill to the NFL, and now the injury to Bratton, Virginia still has plenty of talent in its defensive backfield. Hall is as good as it gets at corner in the ACC; he finished the 2018 season with two interceptions, two sacks and 22 passes broken up, which led the ACC. The senior corner should be able to lock down one side of the field.

Without Bratton, though, Virginia needs someone else to fill his role at corner. Luckily, UVA has options here, too. Nick Grant, in his fourth year with the program, has appeared in 24 games over the last two seasons, mostly on special teams; he may be at the top of the list. Germane Crowell (1.5 tackles in 2018), Myles Robinson and Joseph White are inexperienced, but in the mix, too. The same can be said for Jaylon Baker, a redshirt freshman and former 3-star recruit.

And with Hall on one side of the field, opponents could (or should) look to target Virginia’s other corners. Regardless of who replaces Bratton, they will need to be ready. It certainly helps, though, that UVA has a front seven that should be able to get after the quarterback, starting with 6-foot-7 pass rusher Charles Snowden (2.5 sacks, 11 runs stuffs last season).

Bryce Perkins gets set for big 2019 season in Charlottesville