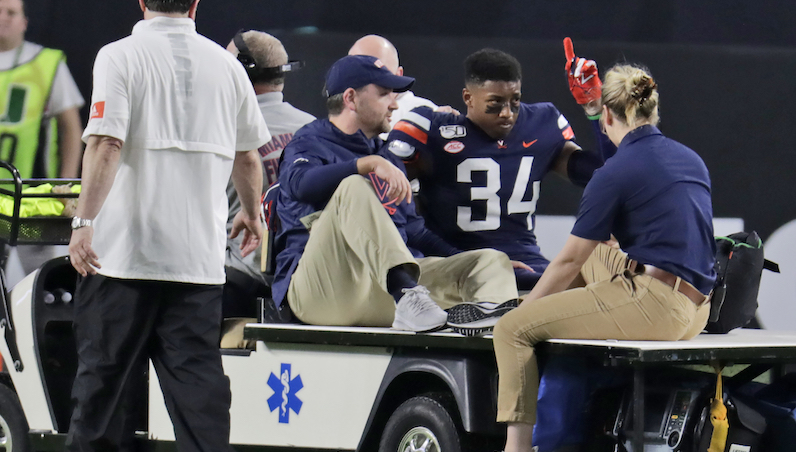 Virginia cornerback Bryce Hall (34) gestures as he leaves the field on a cart during the first half of an NCAA college football game against Miami, Friday, Oct. 11, 2019, in Miami Gardens, Fla. (AP Photo/Lynne Sladky)

It should go without saying, but Virginia (4-2) lost more than a football game on Friday night. In the second quarter of Virginia’s loss at Miami, Bryce Hall, Virginia’s star defensive back, suffered an injury to his left leg. A towel was placed over Hall’s injured leg; shortly after that, he was carted off the field.

Hall, a senior, has been in Charlottesville for the entire Bronco Mendenhall era. He could’ve left after the 2018 season for the NFL Draft; however, Hall elected to return for one final season. Hall still projected as an early-round draft selection — prior to the injury.

Through the first six games of the season, Hall registered 20 total tackles, including three for loss. As a junior in 2018, Hall led the nation with 22 pass breakups. Hall intercepted five passes during his time with the Cavaliers.

Hall is obviously a major loss for UVA, which also lost Darrius Bratton, who projected as a starting cornerback, to a knee injury in the middle of August.

On Saturday night, Hall took to Twitter to address his fans, teammates and coaches.

Can’t express how much all the love, support, and prayers have meant for everyone who has reached out. All is well🙏🏽 I know God’s got my back and He works all things together for the good. All pain has a purpose and I will be back stronger than ever from this💪🏽! #Belie⚔️e

After two straight defeats — at Notre Dame, at Miami — Virginia is now 4-2 overall (2-1 ACC). Virginia, however, is still leading the incredibly murky race to win the Coastal Division. As of early Saturday morning, UVA was the slight favorite to win the division.

Virginia lands at No. 20 in this week’s AP Poll