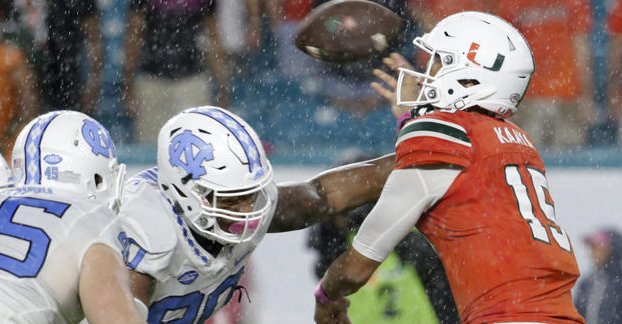 University of North Carolina junior defensive tackle Nazair Jones has elected to forego his final season of eligibility and will enter the 2017 NFL Draft following the Hyundai Sun Bowl vs. Stanford.

“I’m so thankful for this amazing university,” says Jones.  “The University of North Carolina has changed me so much since the first day I stepped on campus. Throughout my career, I have been with a family of brothers and found people that have become my closest friends. I want to thank our amazing coaching staff, support staff and an incredible fan base. I know Tar Heel nation will always have my back!”

“It’s been a pleasure coaching Naz throughout his career at UNC and watching him grow as a person both on and off the field,” says head coach Larry Fedora.  “He has overcome great physical adversity and improved tremendously since he came into the program in 2013.  This season he was the leader of our defensive line and someone everyone on the team respected. I believe he has a bright future in professional football if he continues to work hard and focus on being the best he can be.”

Jones has been a productive player on the Tar Heels’ defensive line, registering a career-high 62 tackles, including 7.5 tackles for loss, 1.5 sacks, a forced fumble, a fumble recovery and three pass breakups in 2016.  He was named third-team All-ACC for the second consecutive season as the Tar Heels went 8-4 and earned a bid to the Sun Bowl in El Paso.  Jones recorded at least five tackles in eight of 11 games, including a career-best eight stops in a 48-20 win over Georgia Tech.

A native of Roanoke Rapids, N.C., Jones has played in 34 games at UNC and made 21 starts.  As a sophomore, he had 40 tackles, four tackles for loss and one interception, which came in the ACC Championship Game vs. Clemson.

As a redshirt freshman in 2014, Jones earned ACC Defensive Lineman of the Week honors in the win over Duke with five tackles, a sack and a forced fumble.  He also had a memorable interception at Virginia that year, which sparked the Tar Heels’ come-from-behind win in Charlottesville.

Prior to the 2016 season, Jones founded his own non-profit organization called M.A.D.E Men Mentoring to pair underprivileged children with local college athletes