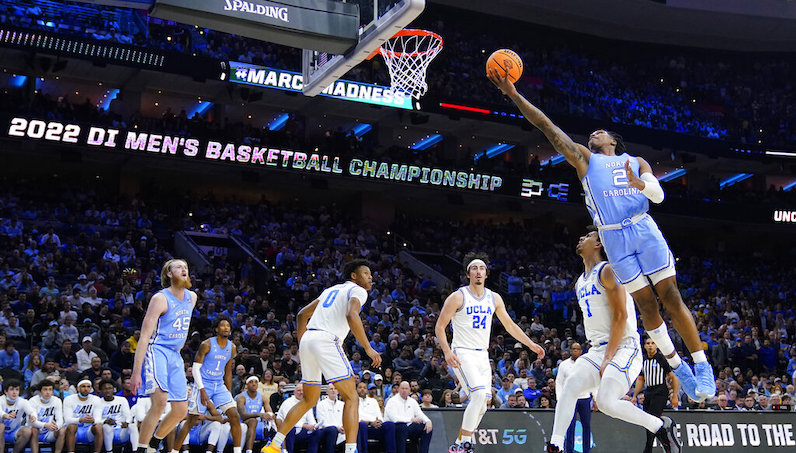 North Carolina's Caleb Love goes up for a shot during the second half of a college basketball game against UCLA in the Sweet 16 round of the NCAA tournament, Friday, March 25, 2022, in Philadelphia. (AP Photo/Matt Rourke)

The first ever 8 seed vs. a 15 seed matchup in the NCAA Tournament (men’s basketball) is set to take place. It’s David vs. Goliath, with a ticket to the Final Four on the line: 15-seed Saint Peter’s vs. 8-seed North Carolina.

It’s been a magical stretch for first-year head coach Hubert Davis and UNC. Since the calendar flipped to Jan. 24, the Tar Heels are 15-3, including wins over Duke, Virginia Tech, Baylor and now UCLA.

North Carolina’s comeback 73-66 win over UCLA was a wild affair. Once again, sophomore guard Caleb Love was explosive with his shot-making: 30 points (6-of-13 3PA), including 27 in the second half.

The improbable run from Saint Peter’s is the story of the 2022 NCAA Tournament. Now, following wins over Kentucky, Murray State and Purdue, head coach Shaheen Holloway finds his team in the Elite Eight.

Of course, if UNC gets by the Peacocks of Jersey City, and Duke is able to defeat Arkansas in San Francisco, it’ll setup a scenario that’s never happened before: UNC vs. Duke in the NCAA Tournament, with the Final Four on the line.

Before that, though, UNC has business to take care of in the Keystone State. Here’s everything you need to know, ahead of UNC-Saint Peter’s.

Following wins over Auburn and Iowa State, Miami moves to the Elite Eight as well