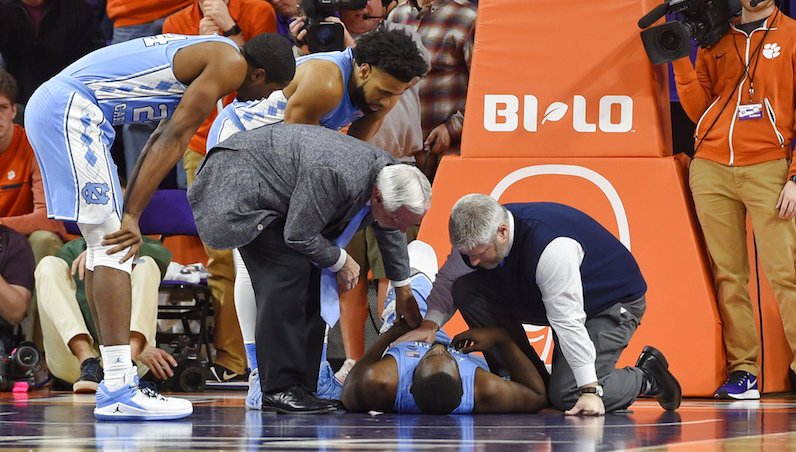 North Carolina's Theo Pinson is attended to by coach Roy Williams, center, and a staff member, after injuring his shoulder during the first half of an NCAA college basketball game against Clemson Tuesday, Jan. 30, 2018, in Clemson, S.C. (AP Photo/Richard Shiro)

After suffering a nasty fall while going for a rebound in the loss at Clemson, Theo Pinson injured his shoulder.

Pinson was examined at halftime, and didn’t return as North Carolina’s comeback attempt fell just short. Following the game, Pinson said he expected to play this Saturday against Pittsburgh. On Friday, Pinson and coach Roy Williams reaffirmed that stance.

As a senior, Theo Pinson is playing a career-high 28.3 minutes per game, and using a career-best 17.1 percent of UNC’s possessions when on the floor. Pinson averages 9.1 points, and shoots 59.3 percent on non-post-up attempts around the basket, per Synergy Sports — 24th in the ACC (minimum of 50 attempts).

However, Pinson’s impact is most important in play-creation and defense. According to KenPom, Pinson has assisted on 23.4 percent of his teammates’ made field goals when on the court this season — second on the team. A Pinson drive surrounded by shooters — Kenny Williams, Joel Berry, Cameron Johnson and Luke Maye — is a bear to defend.

The senior from the Piedmont Triad can finish at the cup, dish or knockdown a free throw if a defender sends him to the line — 81 percent, No. 11 in the ACC.

According to Sports Reference, Pinson has a defensive rating of less than 101 points per 100 possessions.

The next big recruiting target for UNC basketball