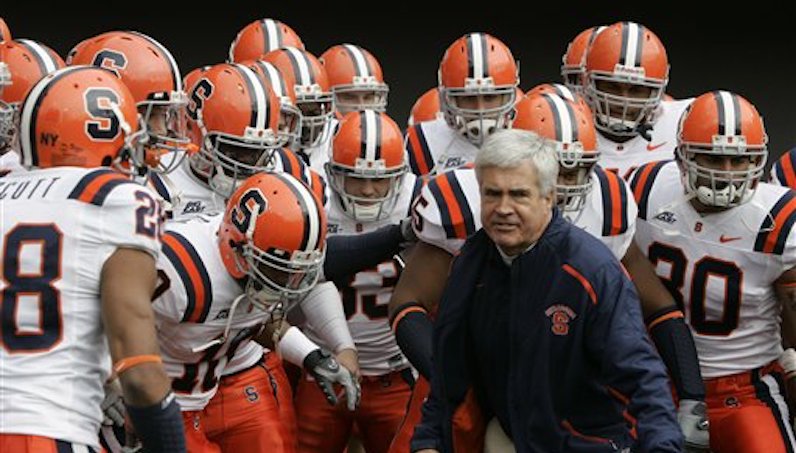 Syracuse head coach Greg Robinson leads his team onto the field against Cincinnati in an NCAA college football game, Saturday, Nov. 29, 2008, in Cincinnati. It was the last game at Syracuse for Robinson. (AP Photo/Al Behrman)

Mack Brown and North Carolina football are in the process of assembling a coaching staff. On Thursday morning, another chip fell; UNC will hire Greg Robinson to be its defensive coordinator, according to a report from FootballScoop.

Robinson, 67, has been a football coach since the middle of the 1970s, including a two-year stint at NC State (linebackers coach, 1980-81). However, he’s spent the past few seasons out of the industry. Most recently, he was the defensive coordinator at San Jose State.

Unsurprisingly, he has a working relationship with Brown; Robinson was the coordinator for Brown’s defenses at Texas in 2004 and 2013, after the midseason firing of Manny Diaz. The 2013 Longhorns ranked 57th nationally in scoring defense and 69th in yards per game.

In between those two stints, Robinson was the head coach at Syracuse (2005-08). During his four seasons with the Orange, Syracuse went 5-37 (10-37 without record adjustment). Robinson also has a decade of experience in the NFL as a defensive coordinator, too.

Bubba Cunningham: “There’s a charisma and an enthusiasm that’s rare in people and Mack has it”