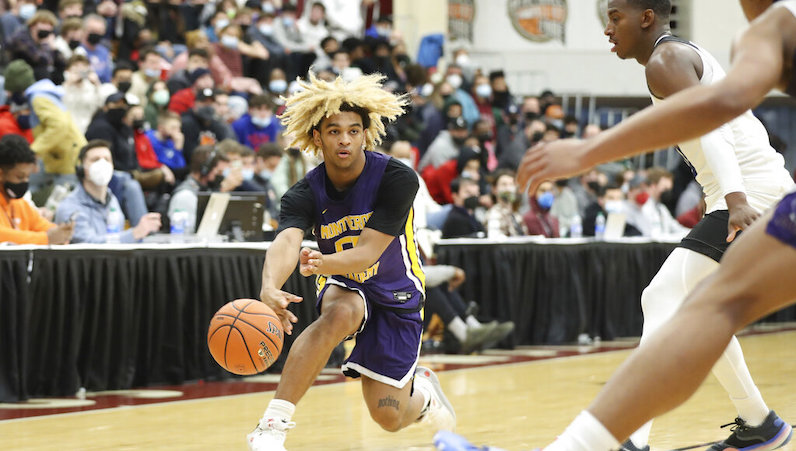 Over the weekend, Skyy Clark — a 5-star point guard in the 2022 class — decommitted from Kentucky. The 6-foot-3 guard is a top-25 prospect for 2022, according to 247 Sports. That reporting was followed by Clark asking for a release from his NLI.

Back in Oct. 2020, Clark initially committed to Kentucky over Memphis, UCLA and North Carolina.

With Clark re-opening his recruitment, the Tar Heels could look to get back in on Clark. A lot his changed in the span of 18 months, though. Roy Williams is no longer the head coach; Hubert Davis is running things.

Subsequently, UNC added a commitment from 4-star 2022 guard Seth Trimble, who picked the Heels in the summer of 2021.

Currently, North Carolina has two ball handler on its roster: Caleb Love and RJ Davis. Love seems like a possibility to test the draft waters after the season, although his stock is but only so high. Davis, on the other hand, is in the midst of an excellent sophomore season and seems like an excellent piece going forward.

Of course, Davis and UNC have gone all-in on the double-point guard lineup this season. To an extent, that’s out of necessity; however, this is the mix the staff has preferred over Kerwin Walton playing more. So, UNC could look to build more double-PG lineups in the future, too.

When Clark committed, Kentucky’s primary recruiter was assistant coach Joel Justus. A native of Winston-Salem, N.C., Justus is now the lead assistant at Arizona State, under Bobby Hurley. However, for a portion of Clark’s recruitment, Kenny Payne was on staff at Kentucky, too.

Payne, who was an assistant coach for a decade at Kentucky (2010-20), including six years at the program’s associate head coach, left to become an assistant coach with the New York Knicks in Aug. 2020. For weeks now, Payne has loomed as one of the favorites to land the Louisville job.

It seems unlikely, but the slim possibility exists where Payne gets the job, then looks to land Clark, who plays his prep basketball for Montverde (Fla.) Academy.